How To Master The Bryant Park Free Movie Night The HBO Bryant Park Summer Film Festival kicked off its ten-week run last night, with a festive, picnicking crowd filling the lawn behind the Library for the opening-night screening of Ghostbusters. As hoped, a costumed crew showed up to watch the movie and, though they were somewhat vague about their accomplishments re: capturing real-life evil spirits, they brought enough gear to (spoiler!) defeat Stay Puft once again should he come crashing over the Bank of America building. Click through for some photos from the scene last night, and below you'll find some tips on how to do the Bryant Park Movie Night right.

Here are some observations of how the whole thing works, from a Bryant Park Film Festival first-timer. 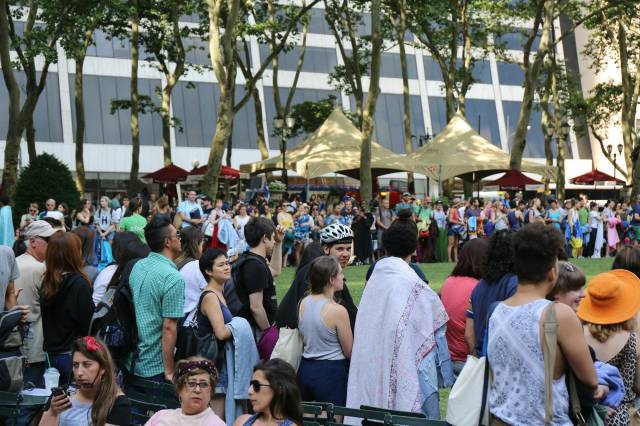 The Waiting is the hardest part... (Scott Lynch/Gothamist)

There are two stages to the battle for prime blanket space on the lawn. First you wait on line at one of eight entrances just behind the decorative stone wall that surrounds the park's lawn area, and at 4:00 they start letting people down from there to the edges of the grass itself. This is where the serious strategizing begins.

There are lots of chairs and tables scattered around the pebbly perimeter, and some people eschew the lawn entirely and focus on getting the best possible view while sitting upright. One industrious gentleman gathered together five or so tables, covered them with paper, and planned on throwing a proper dinner party of sorts before the movie began.

Most folks, of course, go straight for the grass, which is open at precisely 5 p.m. Note: there is no warning or countdown for this part! Someone just says "It's 5!" and all hell breaks loose. Here's what that looks like. BE READY! 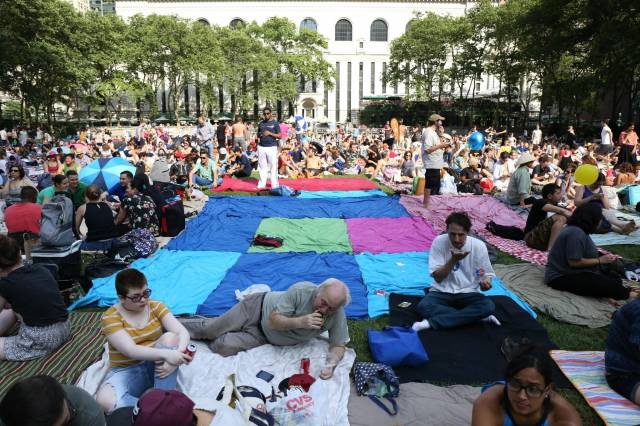 Within seconds, most of the lawn is covered, and the real pros have huge sewn-together frankenblankets that could accommodate whole villages. If you're more of an amateur blanket-spreader, don't mess with these folks, who snag all the dead-on center spots. Even on opening night, there was plenty of room towards the back and on the sides without having to get too frantic.

There is a LOT of waiting around once you get settled. The movie doesn't start until at least 9 p.m. because it has to get good and dark, so if you figure people get on the pre-line at 3, then jockey for position at the grass's edge at 4, then lay down their blanket at 5, there's still four friggin' hours to go before showtime. Bring amusements. Do your homework. Take a nap. Wonder if it's really worth it. 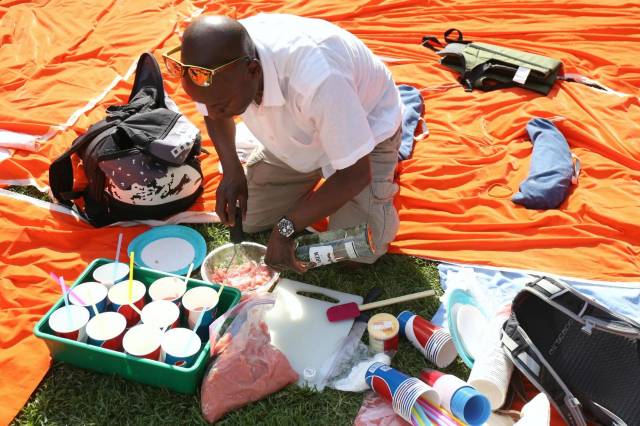 Lots of time to kill means lots of eating. And drinking. As always at these sorts of things, most blanket parties at Bryant Park featured lavish spreads (or, at least, a shit-ton of chips), but I was mostly impressed by the boozing going on in some quarters, particularly the guy who was cranking out dozens of frozen strawberry daiquiris for his blanket-mates. Technically, there's no alcohol allowed in Bryant Park, but clearly it's no problem slipping in whatever. Just bring your Solo cups and play it cool.

The HBO Bryant Park Summer Film Festival shows movies every Monday through August 24. Next week is classic noir, with Burt Lancaster and Ava Gardner in The Killers.

#bryant park
#movies
#original
Do you know the scoop? Comment below or Send us a Tip