How To Keep Cool During The Summer, According To John Wick's Tailor

Welcome back to Summer Sucks. For this week's installment, we talk to the John Wick costume designer about how to dress for summer in New York City.

We've all felt the particular misery of descending from the boiling street into the furnace-like train platform around mid-July. Then, the subway doors open and, if you don't get a dreaded hot car, your sweat-drenched body is hit with an Arctic blast.

Dressing for summer can feel like a game of chance: Do you wear the least amount of work-appropriate fabric possible? Do you relegate yourself to a uniform of wrinkly linen? Do you dress for outdoor temps or cold, air-conditioned train and office temps? This temperature change whiplash makes it difficult to pick clothes on given summer morning.

"It’s really very tricky: How many people do you see coughing in the summer in New York?" says Luca Mosca, the costume designer best known for his work dressing Keanu Reeves in the action franchise John Wick. (In a meta twist, he also played John Wick's tailor in the second film.) "It’s a plague! It’s so dangerous, right?" Well, at the very least it's uncomfortable.

The New York City-based costume designer lives on the Upper West Side, frequently takes the 1, 2, and 3 trains get around town, and feels your pain when it comes to navigating a sweltering NYC summer, particularly once August hits and that summer heat is really baked into the subway stations. "It feels as if MTA had turned the heat on," Mosca says. "And you’re ready to pass out." So how do you dress for the varying temperature shifts? 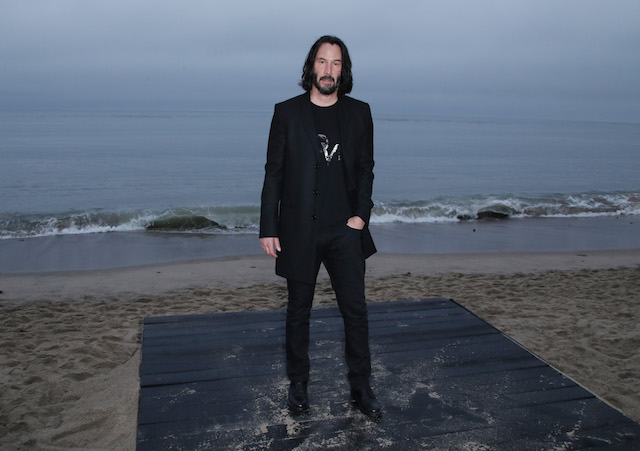 This is what comes up when you search Keanu Reeves + Summer. (Shutterstock)

While we usually associate layering with the colder months, Mosca recommends thinking about layering for the summer, as well. "What I would recommend is always to have some moisture-resistant layer underneath," he says, "That can be something as simple as a t-shirt or a tank top." He particularly recommends Uniqlo's many moisture-wicking offerings or a Hanes t-shirt, so that your clothes don't become doused in sweat en route to work. Though the idea of carrying around a jacket in the summer seems counterintuitive, getting into the habit of doing so, particularly to combat those temperature shifts, isn't a bad idea, he says.

If you've entertained the idea of becoming a hat person, but are concerned the lid will act as a heat trap, Mosca has some good news. "Hats have been developed that contain cooling elements," he notes. "And by virtue of keeping your hat very cold, you cool down the whole body. It's quite effective." There's a decent range of headgear out there featuring space for cooling packs to go inside of them, from this very chill bucket hat to a cute straw hat.

If that isn't enough relief, Mosca has another trick: "If you run your wrist under cold running water, you get immediate relief," he says, "Because the arteries and veins in your wrist cool down all the blood, by virtue of exposing your bloodstream to cold temperatures." You can achieve the same thing by wearing wristbands designed to cool the body down, ranging from this newfangled, Apple Watch-esque contraption to a more cost-effective, sporty-looking number.

There's more to come in the future, he says. Mosca's career has made him privy to battery-operated, wired garments specifically designed to keep actors cool during shoots. "That technology that exists, and that we provide actors with sometimes with for movies, is [currently] a little too expensive, and bulky and impractical," he says, but he says they're working on it. "It’s being developed, and will be hitting the mainstream market very soon."

This has been the latest installment of our NYC Summer Sucks series. Hit us up if you have any questions (use "Summer Sucks" in the subject line), or just want to commiserate. And please hashtag us in both your summer fashion photos and your summer misery photos with #NYCSummerSucks.