How To Identify Poison Ivy, Which Is All Over NYC

Over in Long Island City, Queens, an unwieldy bunch of poison ivy has fully taken over an MTA-owned fence, which separates their lot from the sidewalk. Unsuspecting and oblivious passers-by are likely to brush right up against it as they walk along that stretch, unaware of the hellish itchy aftermath to come

When we asked Ronnit Bendavid-Val, Horticulture Director at the Brooklyn Botanic Garden, to confirm the plant in this photo was indeed poison ivy, she noted that it was, and also that New York City has seen a spike in poison ivy over the past three years. “I’ve seen it all over the city, crawling up lampposts, on fences," she told us. "The past three years, with the mild winters and long wet springs, [we've] seen a huge growth of poison ivy and other weeds that spread through their roots." 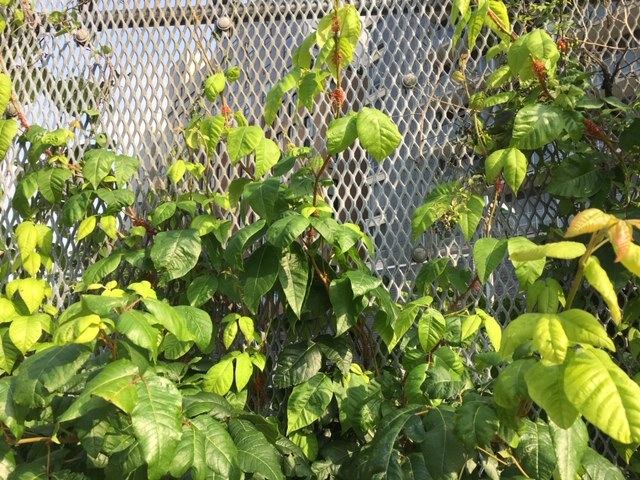 Kristy King, NYC Parks Director of Natural Areas Restoration and Preservation, told Gothamist that poison ivy "is one of the most common species in our forest, top three [not including trees]. So it's definitely everywhere."

Would you have been able to positively ID the MTA's poison ivy wall if you had casually walked by? If not, here's what you need to know.

HOW TO IDENTIFY POISON IVY

King says there are two easy ways to ID the plant, you just need to remember these phrases: "Leaves of three, Let it Be" and "Hairy rope, don't be a dope."

These are pretty self-explanatory, but to dig in a little more, you can identify poison ivy through its leaves—look for a stem with three leaves (these can have smooth or notched edges), with a larger leaf at the end, and two smaller ones on either side. In summer, the leaves are green, but in fall they feature a more yellowish-orange hue, and in spring they are closer to red.

Still not sure if what you're looking at is poison ivy? Check the vine—if it's a woody vine that looks hairy or furry, slowly back away.

HOW TO REPORT POISON IVY IN A PARK OR PUBLIC SPACE

King says the Parks Department hears about poison ivy sightings through 311 calls. "Usually when it's encroaching upon hiking trails and people are worried about it brushing up against their ankles," people will call in. She notes they definitely receive these messages, so don't fear your 311 call is like shouting into a void (the MTA may have ignored the 311 calls on the poison ivy patch on their property, but King promises that Parks is listening.) —"311 requests definitely get filtered down to those of us that are working on the ground."

On their end, the Parks Department also has the Parks Inspection Program, where inspectors "go out and walk trails and inspect all kinds of safety and well-being conditions in the parks." If they spot poison ivy along, say, a walking path, then they will clear it. 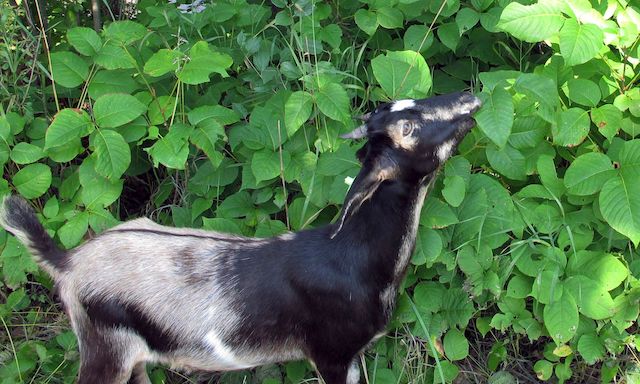 A goat delicately snacks on some poison ivy. Do NOT do this, unless you are also a goat. (Shutterstock)

HOW TO GET RID OF POISON IVY

There are several ways to remove poison ivy, some smarter than others. First of all, never burn it, because then you will inhale it and it will get to your lungs, "causing extreme pain and possibly fatal respiratory difficulty."

Pesticides also aren't good, and not very effective, King revealed, and "pruning can actually encourage more vigorous regrowth." So that leaves us with some hardcore manual labor—the best way to clear this beast would be to "throw on a Tyvek suit or something and grab it out by hand," King says, adding that this method "is incredibly grueling and actually dangerous," but it works. While that way has "a high risk of exposure," she says "really getting under the soil and pulling it out by the roots like that is the most effective way to get rid of it."

Maybe just leave it to an expert!

WHAT TO DO IF YOU TOUCH POISON IVY

King says you'll want to "definitely wash your hands as soon as possible, and wash them with their commercial products available that are meant to remove the oils of poison ivy." There's a popular one that Parks uses called Tecnu—"That's what we use like in-house... when people come back from the field if [anyone] thinks they've been exposed they wash their hands with it." You can also get pre-packaged wipes that have that chemical on them. "But really... dish soap works," King says, "anything that can cut grease" will work.

"I actually like poison ivy," King told us, "because it's a native species in our area... one of only a few native vines that we have in our forests, [and] it's a nice native species, although I do understand the public health hazard." She says poison ivy also has "really great berries that are great food for birds and other forest wildlife."

If you spot poison ivy in a public space (the city says it's illegal to let poison ivy grow in NYC), report it to 311... and then send us some photos.

#plants
#poison ivy
#original
Do you know the scoop? Comment below or Send us a Tip