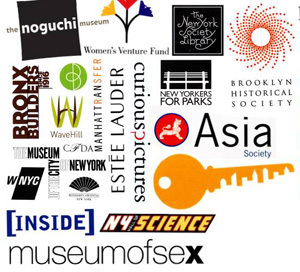 The NY Sun takes a look at the impact of graphic design firm Pentagram on the city’s arts institutions. The article focuses mostly on partner Paula Scher, who has created identities for the Public Theater, the Metropolitan Opera, Jazz at Lincoln Center, Symphony Space, the High Line, the Asia Society and a host of others.

Scher, who designed the original “Boston” album in 1976, is now designing for the Park Avenue Armory and Drill Hall, the new venue located in the old Seventh Regiment Armory on Park Ave. between 66th and 67th streets that was the center of a neighborhood dispute. Scher designed the logo for the Seventh Regiment Armory Conservancy, the group that is restoring the building.

Pentagram has singlehandedly influenced how cultural groups market their programs to the public. Instead of the old practice of relying on a hit poster, Pentagram crafts an image for the institution, which reaps rewards over time. A typical identity last six to nine years before needing to be tweaked, according to Scher, who says that the goal is to “take somebody’s essential spirit and make it communicable.”

Scher joined Pentagram in 1991 when she realized that she was losing major jobs to “more accomplished firms, or bigger firms, or men,” she told the Sun. No surprise there, given the sometimes antiquated attitudes in the industry. Last month, she was featured in a new $300 million Hewlett-Packard promotional campaign.

A breakthrough came when the Public’s George C. Wolfe hired Scher to design the theater’s logo and visual identity. She chose American Woodtype, writes the Sun's Kate Taylor, and spelled Public vertically with the letter going from thick to thin in a visual reference to the island of Manhattan. Scher then was hired by the Metropolitan Opera to reclaim its name from the museum down the street (which we're not sure has really happened).

To take back the Met name, Ms. Scher designed a logo that says "The Metropolitan Opera," with "Met" and "Opera" in black and the other letters in gray. She used a traditional serif font, but made it look contemporary by surrounding the words with lots of white space. For the first season's brochures, she chose images that looked more like fashion photography than what people typically expect from opera.

Pentagram partner Michael Bierut, who has designed for BAM, The New York Times Building, Citibank, Saks, Tiffany & Co. and others, reworked the Morgan Library’s image with the help of Dante, a 20th century revival of a font designed in 1495. "Every word [in the museum] is in it," he told the Sun, including "the long list of donors in the lobby, 'Women's' and 'Men's,' the Morgan Shop, every piece of membership information, and the label on the Gutenberg Bible."

Upcoming projects for Scher: several Lincoln Center-based institutions. Bierut, who recently urged fellow designers not to take their gifts for granted, is designing identities for the Museum of Arts & Design at 2 Columbus Circle, the Tenement Museum and the Museum of Chinese in America.