by Raphael Pope-Sussman
While bemoaning the unbearable hotness of being a New Yorker in summer on a recent afternoon, a friend and I took a moment to ponder a critical existential question: how the hell did people in New York survive before air-conditioning? More importantly, how did they sleep at night?

My grandfather, a lifelong New Yorker who is almost 98, is my go-to source of information about the good/bad old days, so I called him up to ask how things were back in the '20s and '30s, when he was growing up in Williamsburg and East New York.

On the hottest summer nights, he said, he and his older brother rolled out a couple of blankets onto the fire escape and slept there. This ritual was repeated all over the neighborhood and all over the city.

A NY Times article from 1929 describes the scene in Washington Heights, where children turned fire escapes into little porches for play by day and sleep by night:

On many of these tiny porches on Washington Heights, pillows are added to the quilt and the children sleep till the cool night breezes come, when they are taken in. The New Yorker, perhaps, gets more out of this tiny porch per square inch than the suburbanite gets out of his per square yard.

My grandfather recalled that as soon as one kid got out on the fire escape, every kid in the neighborhood wanted in. "Once one set of kids saw another set of kids out there, it started a riot," he recalled. "It would start a whole rage of kids doing the same thing."

But it wasn’t only kids. On some days, everyone had to get outside. During a heat wave in 1934, the Brooklyn Daily Eagle reported:

15,000 persons spent last night on the beach at Coney Island and several thousand more sought relief from the heat in Brooklyn parks and playgrounds. Additional thousands slept on roof tops and fire escapes in the Brownsville, Williamsburg and other crowded sections of Brooklyn. In Manhattan, many slept on the grass in Central Park and on the open piers in the East River.

While sleeping out on the fire escape offered a nice respite from the heat, it presented some safety issues for building residents. After all, it's great to have the extra real estate until there's an actual fire. My grandfather claimed that since his family always lived on the top floor, he and his brother weren't obstructing potential foot traffic. Unless you counted his parents and brothers, who were asleep inside in the apartment. 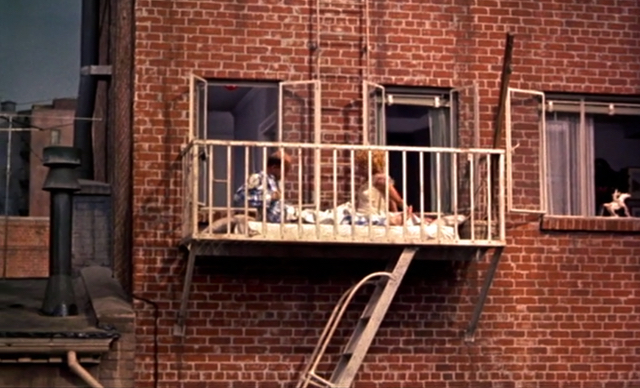 A couple wakes up on a fire escape in Rear Window

There were other, more unusual hazards to fire escape sleeping. In July of 1936, the Eagle described the misfortune of David Cohen, 60, of 190 Osborn Street, who was rudely awakened from his slumber one night by a "bucket of boiling water thrown by an unknown person from the roof of the building or from an adjoining apartment window."

Over the years, the Eagle covered numerous mishaps involving people sleeping on fire escapes. A short item in August 1930 reported that Sullivan Street resident Benjamin Diolute suffered possible internal injuries after he "fell through an opening and landed on the roof of an adjoining house two floors below." (That same night, another man was injured when he slipped trying to enter his locked apartment through the fire escape.)

In the summer of 1900, a 13-year-old girl asleep outside a hot apartment fell through a gap in the metalwork to her death.

But it was fire safety, not the perils of sleeping on fire escapes, that raised the ire of the city’s papers. As early as 1902, the Times was criticizing the city for its failure to police these critical safety features. "Little or nothing has been done by way of keeping fire escapes clear," the Times wrote. "Especially in the tenement districts the escapes have been used for every conceivable purpose which would make them useless for the objects they were intended to conserve."

People got creative with their fire escapes. In addition to sleeping, fire escapes were also used for storing ice boxes, meats and vegetables, and sometimes coffins. “They are unable to pay to have the body embalmed, and yet do not wish to bury it within a few hours after it dies,” a neighborhood fire chief told the Times. The fire escape kept the body "cool" and presumably kept the smell out of the apartment.

Some folks got really creative.

"As a natural outgrowth of the prohibitive rents and the lack of legal intervention it is now related that many families are in the habit of renting their fire escapes on particularly warm nights of the Summer, to be used as sleeping quarters."

The Times blamed the situation on bureaucratic incompetence, but there might have been more going on there. The paper quoted one fire captain, who said he didn't mind the practice.

"Let them use the escapes," said one captain. "There is very little in life for them, anyway. If they can get a little more happiness by sleeping on the fire escapes, let them do it. If there is a fire, they will only be nearer the means of safety."

According to my grandfather, the maximum capacity for his fire escape was two, although photos from the era show far more made it work.

Still, two kids on a narrow fire escape? I asked my grandfather if these accommodations felt cramped. Nope, no worse than the situation inside. "We already shared a bed," he said. Seniority ruled, so the two younger brothers had to suffer in the apartment.

It wasn't only the poor who were sleeping outside their buildings, either.

In 1908, the NY Times ran a trend piece about rich people discovering that they could stay cool by bedding down on their roofs, entitled "Roof Sleeping Now Popular In New York." Since they were rich, they invented something called a "roof bed," i.e. a bed on a roof, with its own little roof to keep out the rain.

Unsurprisingly, by the time the Paper of Record was On It, poor people had already moved on to sleeping on fire escapes, which didn't require you to schlep upstairs to get some shut-eye.

My grandfather said that in his youth people in the neighborhood sometimes still slept on the roof, but you had to be careful not to incinerate your feet on the tar. 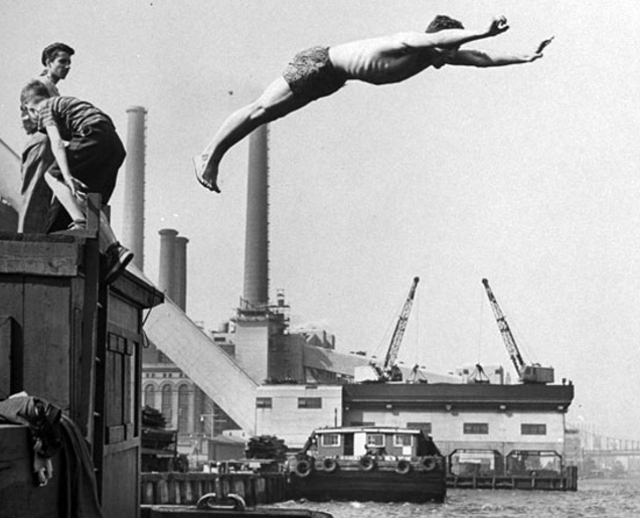 There were other ways than hanging out on the fire escape to stay cool, of course: Drinking water kept cold in the icebox, fire hydrants, baths, beer, and ice cream for those who could afford it. And, of course, the beach.

Still, being hot and sweaty was just something you had to accept.

Did people whine about the heat? Yeah, they did. Commiserating about the weather united New Yorkers of all stripes—roof-bedders and fire-escape-sleepers alike—as it will until we are all under water.

And at the end of the day, like a poor soul who works near the Port Authority, you had to embrace the misery. "We didn't have a say, so we just endured whatever it was," my grandfather explained, laughing. "It was just taken for granted that you had to suffer." (And pray for no fire.)

#fire escapes
#summer
#original
#history
#flashback
#summer in the city
Do you know the scoop? Comment below or Send us a Tip