How Groundhog Day, Our Bizarre Wintertime Hallucination, Came To Be

Starting at 6 a.m. on Saturday, the masses will descend upon Staten Island Zoo, rattling the gates in anticipation of meeting its biggest celebrity: Chuck, a storied groundhog, and New York City's own meteorological soothsayer.

Every year on February 2nd, the crowds gather, their beady eyes fixed unblinking upon the enclosure from which, after the politicians finish their speechifying and the bugles cease their blaring, Chuck will scamper. His movements afford us a glimpse into our shared future: If he sees his shadow, we will have six more weeks of winter; if he does not see his shadow, then we can look forward to an early spring.

If you have never witnessed the ritual for yourself, I suggest you spend some time with the video below. It's a chaotic process with ambiguous results.

Inexplicably popular, this annual observance has persisted in the United States and Canada since at least 1886, when the first mention of Groundhog Day appeared in Punxsutawney, Pennsylvania's local paper. The following year saw the first official celebration staged at nearby Gobbler's Knob, with the original Punxsutawney Phil scrabbling out of his burrow to deliver the verdict on onlookers' fate. Well over a century later, tens of thousands of people still flock to Punxsutawney to watch a groundhog (true believers insist this is the same Phil, although he quite obviously is not) squint around for his shadow. Or some snacks, who knows.

Nothing about this tradition makes sense, nor does it necessarily need to. Of course groundhogs (another name for woodchucks, did you know?) possess no inherently psychic powers. That is not really my Groundhog Day beef, though. I would tend to agree that the image of great swarms of people huddled around a rodent, their faces beaming expectation and excitement, is a nice one. I would say it's made even better by the widespread tendency not to question this behavior at all, to instead accept it as extremely regular.

But I mean come on: How could we possibly know whether or not a groundhog sees its shadow? Why would we presume to know what goes on inside its little woodchuck brain, or how it makes sense of its woodchuck world? Sure, a groundhog might scuttle back into its hole when confronted with a wall of looming giants and flashing lights, but do we call that a prediction, or pure animal fear? Let us discuss. 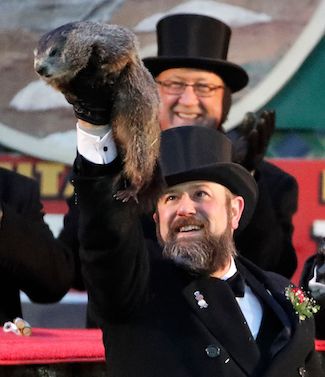 Fundamentally, Groundhog Day exists because people have never been able to get more than halfway through winter before they burn to know when the dark days will finally be behind them. Congrats to us all, because we have effectively reached the halfway point between the Winter Solstice and the Spring Equinox—precisely the time of year when, in olden times, Germanic peoples celebrated Candlemas Day. Per Candlemas legend, if the day in question (February 2nd) brought sunny, bright, cooperative weather, then the Winter might decide to stay awhile; if the day proved stormy and bad and full of snow squalls, then Winter would soon be on its way out. (See this alleged olde Englishe aphorism: "If Candlemas Day be bright and clear, there'll be two winters in the year.")

According to History.com, the clergy-blessed candles distributed on Candlemas Day "represented how long and cold the winter would be," which I suppose makes a certain kind of intuitive sense, and could justify the candle's position as February 2nd's official mascot. But somewhere we make a fairly impressive leap: "Germans expanded on this concept [the candles] by selecting an animal—the hedgehog—as a means of predicting weather."

But they did not originally choose groundhogs; apparently that decision came later, when Germans who emigrated to America found themselves in a landscape devoid of hedgehogs and had to content themselves with the next-best hibernating micro-hog.

Which strikes me as about the most arbitrary choice they could have made, one few sources seem able to explain. History.com notes that boy groundhogs briefly break hibernation in February, poking their heads up from their hovels to survey their environs for potential mates, and I don't dispute it. Groundhogs reportedly boast an above-average number of talents: They climb trees, they swim, they eat vegetables and fruits, and most impressive of all, they whistle (both when they're scared and when they're feeling sexy).

Weather forecasting, however does not rank among their special abilities, and I have no reason to believe they understand seasons the way we understand seasons. Even if one does peek his head from the frozen ground in February, why do we assume that a groundhog would keep our Gregorian calendar, and even if he did, how is it reasonable to expect that his internal clock would rouse him at exactly the same time on exactly the same day, the day he must share his truth, every year for hundreds of years?

Humans, however, see what they want to see, and especially enjoy telegraphing their own feelings and motivations onto animals. Perhaps the Germans began projecting wildly onto groundhogs simply because they were suddenly there. Sure, you could base your predictions on that squirrel rustling through the underbrush, but she hangs around throughout the coldest months. Whereas birds and elks vacate the premises for warmer climes, and bears sleep through the whole season, groundhogs pop up to say hello at around the same time Germans of yore were casting around in the dark, searching for a sign, any sign, to help them read their meteorological future. 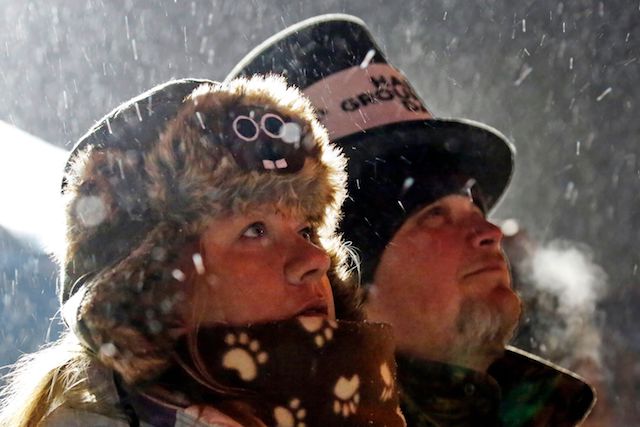 I have found no better explanation as to why we pile so much significance upon these strange little gremlins. Keepers of modern Groundhog Day tradition, the Punxsutawney Groundhog Club, similarly frame the entrance of a woodchuck onto the Candlemas scene as a thing that just sort of happened, and I suppose that the moment it did was also the moment we began ascribing pretty hollow meaning to these humble beasts: "If, according to German lore, the hedgehog saw his shadow on Candlemas Day there would be a 'Second Winter' or 6 more weeks of bad weather." And all these years after German immigrants gamely towed their odd tradition across the Atlantic, we continue to clamor for answers from our woodchuck oracles.

But it's a lot of responsibility to heap on a small creature's sloping shoulders, and at the bottom of everything, it is pure projection: The question of Groundhog Day does not come down to whether or not Phil and Chuck and Wisconsin's Jimmy see their shadows, but rather, whether the humans circled around them do. That, too, comes down to individual interpretation and one's own personal will, and helps explain why only 39 percent of Phil's predictions have panned out. (That, and the fact that climate change has rendered weather patterns wildly erratic, irrespective of the season.)

Anyway, a lot of this probably goes without saying, because Groundhog Day is a patently ridiculous holiday. Maybe we keep it around because, having front-loaded all the fun at the very beginning of winter, we need some kind of party to break up the drudgery. Still, it feels good to get it all of this off my chest. Thank you so much for listening.