New Yorkers are still mourning the destruction of the old Pennsylvania Station, which was razed in 1963 to make way for the blights on the face of our city that are Madison Square Garden and the new Penn Station. But what fewer may know is that Grand Central Terminal (so filled with history) came close to meeting a similar fate by the same hands: Stuart Saunders, who spearheaded the demolition of Pennsylvania Station, fought a decade-long legal battle to build an office tower atop the landmarked terminal and possibly raze one of its sides in the process.

Saunders's attempts were thwarted by a group of passionate preservationists who took the case all the way to the United State Supreme Court. Among them was Fred Papert, who left his job as an advertising agency director to focus on preservationism full-time. Papert died last week at the age of 89, and the New York Times remembers him as having "rallied Jacqueline Kennedy Onassis; Senator Daniel Patrick Moynihan, Democrat of New York; and the architecture critic Brendan Gill in a successful lobbying campaign to save Grand Central from demolition and defacement during the mid-1970s and to safeguard New York City's new landmarks preservation law from the legal challenges of developers."

Marcel Breuer's design for a tower on top of Grand Central.

Indeed, Grand Central's fate was in question well before the mid-'70s. In the angry aftermath of the razing of Pennsylvania Station, then-Mayor Robert F. Wagner created the Landmarks Preservation Commission in 1965, and just two years later, the commission designated Grand Central a landmark. But by then, as detailed in a lengthy Harper's article on the matter, Saunders had merged former rivals New York Central and Pennsylvania Railroad to form Penn Central, making himself CEO of what was now the nation's biggest real estate corporation.

Grand Central Terminal was among Penn Central's holdings, and Saunders was determined to make it as profitable as possible, especially given that the company's revenues were stagnating. So within weeks of the terminal being landmarked, he began soliciting bids for an office tower to be built atop the terminal, flying directly in the face of the Commission's ruling.

Unsurprisingly, the Landmarks Preservation Commission shot down Saunders's bid, and that should have been the end of that. But Penn Central was determined, and it sued, arguing that the ruling was unconstitutional in that it went "beyond the scope of any permissible regulation and constitute[d] a taking of plaintiff's private property for public use without just compensation." A New York State Supreme Court judge agreed, ruling in Penn Central's favor in 1975 and opining that the terminal elicited "no reaction here other than that of a long neglected faded beauty."

What followed was a whole lot of legal back and forth: the city appealed that ruling and won; Penn Central in turn appealed to the highest court in the state and lost; and finally the case made it to the U.S. Supreme Court.

Key in lobbying against Penn Central's efforts was the Municipal Art Society, which quickly created a Committee to Save Grand Central Station and staffed it with Wagner, Jacqueline Kennedy Onassis, and Edward Koch, among others. Papert, along with future LPC chairs Kent Barwick and Laurie Beckelman, ran the committee. On January 30th, 1975, they announced their mission at the Oyster Bar at Grand Central, where Onassis told reporters that "we've all heard that it's too late...Even in the 11th hour, it's not too late." Wagner, meanwhile, emphasized that they were trying to raise awareness that "the battle against the thoughtless waste of our manmade environment is farther from being won than many of us had thought," and that "what is at issue here is the very concept of landmark preservation."

To really drum up support for the cause, Papert, Onassis, and a number of other prominent preservationists organized the "Landmark Express," a one-day Amtrak trip from Penn Station to Washington, D.C. on the day the Supreme Court began hearing arguments in Penn Central's challenge of Grand Central's landmark status.

The train picked up passengers in Philadelphia, Wilmington, and Baltimore, who were fed McDonald's hamburgers and fries; entertained by fire-eaters, mimes, clowns, and musicians; and handed balloons, t-shirts, and buttons that declared, "Save Grand Central" in a blue and white design. As John Belle and Maxinne R. Leighton detail in their book Grand Central: Gateway to a Million Lives, passengers sang a hymn to the building to the tune of Tipperary: 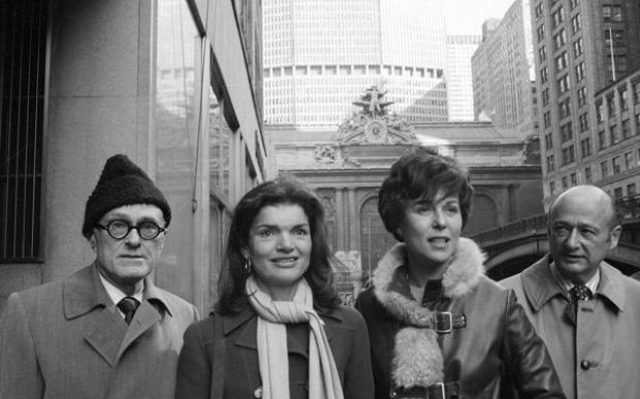 (Photo courtesy of the Municipal Art Society of New York)

"We forgot that the train did not leave Grand Central, it left Penn Station," Papert recalled in an oral history interview conducted by the New York Preservation Archive Project in 2004. "But that didn't stop anybody. The whole gathering was there, and we then slipped into taxis and went to Penn Station, and got down to Washington...When we arrived at Union Station, the place was absolutely mobbed. Pat Moynihan and Joan Mondale were there. But as far as the press was concerned, Joan Mondale could have been a Girl Scout selling cookies and Pat Moynihan could have been a porter. They only wanted to talk to Onassis. The whole story got to be, 'Jacqueline Onassis has come back to Washington.'"

Two months later, on June 26th, 1978, the Supreme Court ruled 6-3 in favor of New York City's Landmark Law. Penn Central, which had been bankrupt for eight years, was defeated, and Grand Central Terminal was saved. 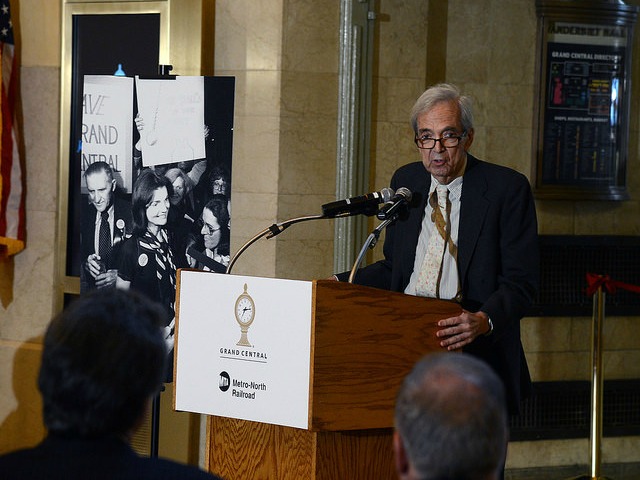 "Fred Papert's legacy is quietly engrained across the City, from the campaign to save Grand Central, to his advocacy on Times Square, to his fights against too-tall towers in low rise neighborhoods," said Gina Pollara, president of the Municipal Art Society. "MAS will remember him as a man of indomitable spirit and endless humor, a leader who inspired us to take on the biggest challenges facing New York City—and to win, whatever the odds."

Papert would go on to gain recognition as the head of the 42nd Street Development Corporation, which he established in 1976 to preserve the history of 42nd Street. Along with Onassis, that corporation oversaw the renovation of Grand Central; it also created Theater Row, built new headquarters and stables for the NYPD's Mounted Unit; and tried—but didn't succeed—in getting a streetcar to run across 42nd Street to further "revitalize" the area. But the Grand Central fight was crucial in forming Papert's philosophy to preservationism going forward.

"You know, Grand Central is the kind of preservationist fight that you want, because when you, say, go to the editorial board of the Times, the Times would come together at the editorial board—because everybody in the city wanted us to win that fight," Papert said in 2004. "Those are the kinds of fights you want. You want fights where there’s a really good, non-participatory democracy; non-'NIMBY' argument for doing it. Because if we don’t largely limit ourselves, our energies, to those fights, then we’re not going to have any ammunition left when the serious ones come up."