How Fast Can A Subway Train Go?

I was somewhere around 14th Street when the train I was on sped up in a way that reminded me, joyously, of the times my parents would accelerate just before a little hill in the road, propelling our family car over it in a way that made us kids in the back cheer for more. "Again!" It was exhilarating, freeing, and left my core feeling delightfully uncentered. My stomach, I always thought, had just traveled up to my heart and back down again, but somehow in a way that left both organs functional. Our car, too, never seemed worse for the wear.

There aren't any little rolling hills in our subway system like there are in my rural hometown, but there are stretches of tracks that, barring any "train traffic" slow-downs, will nearly simulate that rollercoaster-feeling. Take the 2/3 towards Brooklyn, and you'll feel a rush after pulling away from 14th Street, flying by Christopher and Houston, before the train brakes around Canal and jerks you around all the way to Chambers (this stretch is actually the most similar to the rickety old Cyclone). That jolt is both an unwelcome shock and a relief, because at some point the speed buzz feels like it's sticking around a little too long. "Again!" turns into "IS THIS NORMAL?!"

It's normal. A subway train is designed to go 50 MPH, which is pretty fast, and feels even faster when you're flying through a century old, tight-squeeze underground tunnel. A rep for the MTA tells me the speed on their trains are capped at 50, and can reach that speed along some stretches—notably, the 3 mile stretch from Howard Beach to Broad Channel. This is likely the fastest (in MPH) subway ride you'll get in the entire system: 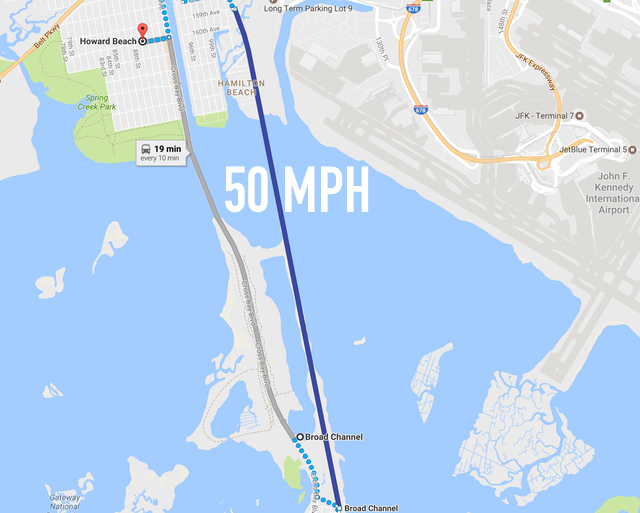 There is no average speed for the city's subway trains, the MTA tells us—it's not something they calculate, and speed limits vary throughout the system.

Despite nothing official on the books, however, there are some numbers out there on average subway train speeds, with NYC clocking in around 17 MPH on average. The below chart is courtesy of Matt Johnson, who "conducted an analysis of all heavy rail transit lines in the United States" and found NYC's to be the slowest on average. With station spacing being a key factor in speed, Johnson notes that the Shuttle's "average schedule speed is very high," because it has "only two stations, one at each end, [with] no intermediate stops." 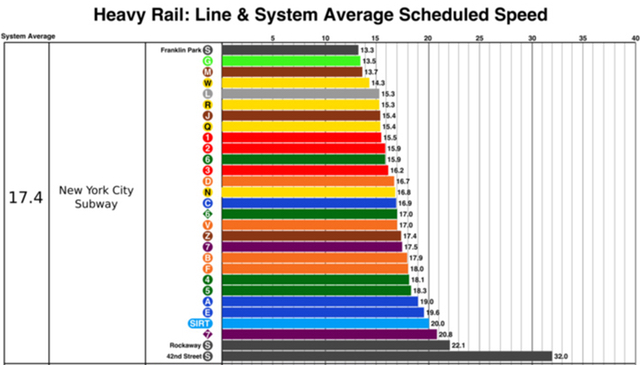 #how nyc works
#mph
#MTA
#speed
#subway
#original
Do you know the scoop? Comment below or Send us a Tip