'How Does That Represent Chinatown?': A Public Art Proposal Ignites Backlash And Controversy

A public art sculpture commissioned by the city for a prominent intersection in Chinatown has spurred protests from residents who say the abstract piece has no connection to Chinese culture.

Shortly after renderings of the artwork by Australian-Chinese artist Lindy Lee were unveiled earlier this month at a community board meeting, critics pounced on her planned sculpture of metallic cylinders. The proposed piece, which was selected out of 80 submissions, would be erected at the public plaza where Canal Street forks with Walker Street, and pay homage to both Chinatown and Little Italy.

“Why put up tin cans?” asked Karlin Chan, a longtime activist and Community Board 3 member. “How does that represent Chinatown or Chinese culture in any way?”

According to a Powerpoint presentation prepared by officials, the design is inspired by Chinese drum towers, Italian campaniles and New York City’s water towers.

Reached in Australia, Lee, the selected artist, wrote in an email that she believed the reaction stemmed from the fact that the design "is not traditionally ‘Chinese,' e.g. there’s no traditional lion gate." But she said that such a plan would ultimately be "generic," adding that, "Every Chinatown in the world has a liongate."

Lee argued that an iconic placemaker would be one that honors the past but also incorporates the present and future.

Chan argued such cultural references would be lost on most observers. He accused city officials of being "out of touch" with the community in an Op-ed for Bowery Boogie, and recently launched an online petition to stop DOT’s plan.

The criticism underscores what several individuals said is a highly secretive and tightly-controlled selection process run by the city’s Department of Transportation. Public art has long been a divisive issue in New York City, which has a host of gatekeepers and where financial considerations often run up against artistic ones.

In the case of the Chinatown project known officially as "Gateways to Chinatown," the budget for the piece is coming from a $1 million federal grant created to foster economic development after 9/11. Although both the Van Alen Institute of Architecture and the Chinatown Partnership were involved in spearheading the commission, both deferred any questions about the selection process to the DOT. 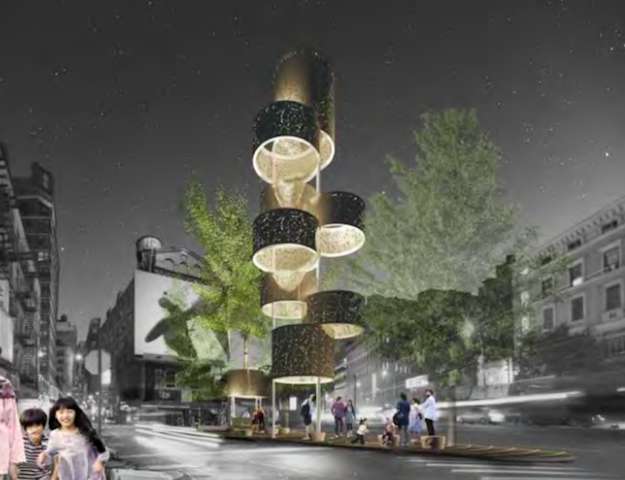 Another rendering of the proposed artwork.

In recent years, the DOT’s effort to install artwork in Chinatown has been fraught with controversy. In February 2018, the agency proposed a 900-pound bronze canine sculpture, meant as a playful nod to the Chinese Year of the Dog, for Kimlau Square, a green space inside Chatham Square which honors fallen Chinese-American soldiers. But community members interpreted the work as disrespectful, drawing objections to the fact that Chinese have been caricatured as dog-eaters and that the city commissioned the work from the Australian husband and wife team of Gillie and Marc Schattner rather than local Asians artists. The sculpture was eventually moved to Foley Square.

Just last summer, a seasonal art initiative that involved painting a mural on the 200-foot stretch of asphalt along Doyers Street was initially met with annoyance from business owners who said the project, which necessitated a street closure, slowed foot traffic and posed a huge inconvenience for deliveries and trash pickup.

Robert Lee, the executive director and curator of the Asian American Arts Centre, said the larger problem has to do with the DOT's lack of transparency when it comes to commissioning public artwork and its failure to engage with members of the Chinatown's arts community. He dismissed a basement meeting at Transfiguration Church and an effort to collect feedback through fliers (which he noted were written in English) as superficial.
"It's only for show," he argued.

Lee, who recently met with DOT officials, said he was told that the agency does not reveal the members of its selection committee.

“We are skeptical about their desire to really engage people like us,” he said. “They want to avoid us because they want to continue to do what they want to do. Which is to place obstacles in front of people of color.”

Wellington Chan, the executive director of the Chinatown Partnership, declined to publicly comment on the DOT’s selection process. Instead, he stressed the pragmatic role of public art, which can serve as orientating landmarks and lure thousands of visitors. In Chinatown, the effort to get the city to erect public art and way-finding symbols has been more than a decade in the making. According to Chan, security checkpoints which started in downtown in the aftermath of the 9/11 terrorist attacks have made the neighborhood more inhospitable and difficult for people to come through.

“This community deserves some help,” he said. "We are working hard to try to bring in foot traffic."

The DOT did not respond to emails from Gothamist seeking comment. Spokesperson Scott Gastel recently told the NY Post, “We will consider feedback and determine next steps.”

According to Lindy Lee, the design presented to the public was not meant to be final and the work has in fact has "evolved considerably" since the initial drawings. She added: "Our design team genuinely welcomes the feedback."