How Did Hollywood Do At Recreating CBGB Circa The 1970s?

Are the cab and street lamp era-appropriate? (Photos via Jeremiah's Vanishing NY)

Last month we learned that CBGB circa the 1970s was being recreated in Georgia, for an upcoming movie about the historic venue. And now, finally, photos from the set in Savannah are starting to emerge. Jeremiah's Vanishing NY has a couple of shots, including the one above, and notes that it was "recreated next to Paula Deen's downtown restaurant" in the neighborhood. Andre Danylevich, CBGB associate producer, says, "We put what is called a plug into the front of the building here. They created a stucco wall, an entrance and an awning and put it on top of an existing storefront to recreate the front of CBGB."

Below you can see a comparison to a photo of the club as it really looked in 1977. They have the "Neolite" sign there, as it was in the '70s, and as WTOC in Savannah reports, "the businesses surrounding the club have been resurrected, including the Palace Hotel." But what did they get wrong in this Epcot version? For starters, the bricks on the building look all wrong, the sidewalk is too thin, the Bowery is only two cars wide... and why isn't there a David Byrne listed in the IMDB credits? 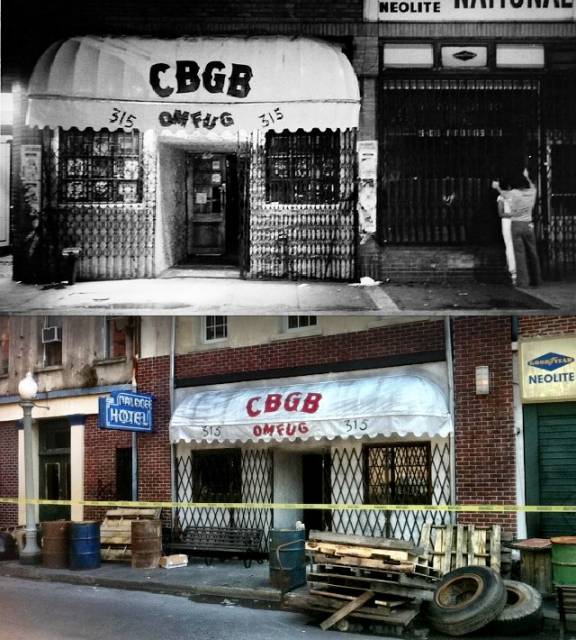 #1970s
#cbgb
#georgia
#movie
#Savannah
Do you know the scoop? Comment below or Send us a Tip
A new Gothamist is coming! We’ve moved comments over to our beta site. Click here to join the conversation and get a preview of our new website.