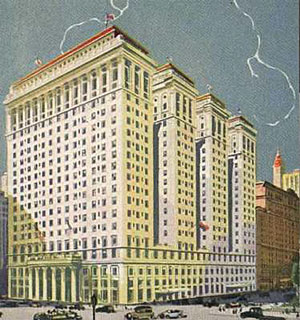 There's been talk of what will happen to the Hotel Pennsylvania for a while now, and today the NY Observer reports that the skyscraper planned to take over the 401 Seventh Avenue address could be stopped by preservationists. Since the demolition project needs to be met with public approval it might not bode well that the construction "would entail building over the railroad tracks that run beneath the hotel and pose engineering and security challenges." However it seems like a done deal, as the NY Times reported today that "Merrill Lynch has been negotiating with Vornado over the terms of a billion-dollar 65-year lease that would give the company control of the half-block hotel site."

The Observer also had a piece earlier this month on the hotel's past and impending future, when the scaffolding started to go up. While the hotel, which was built in 1919, had its glory days, it's far from what it used to be now. The only thing that has stayed the same is the famous phone number (the New York phone number in longest continuous use): Pennsylvania 6-5000, also inspiration for the Glenn Miller song. Besides that, Count Basie, Duke Ellington, and the Glenn Miller Orchestra -- who all played the hotel's ballroom -- have been replaced by bed bugs and sub par conditions. Preservation Online has a quote from Peg Breen, president of the New York Landmarks Conservancy, who stated "It holds a lot of cultural resonance with the city because of all the big bands that played there, but the inside has been pretty much stripped. I don't think anyone who has stayed there recently has been overly in love with the place."

Think it's worth saving? The committee of the local Community Board 5 will meet October 30th to see if the hotel merits landmark status. If the hotel gets demolished, expect the Vornado Tower to be up by 2011...but where will the Westminster pups stay?!