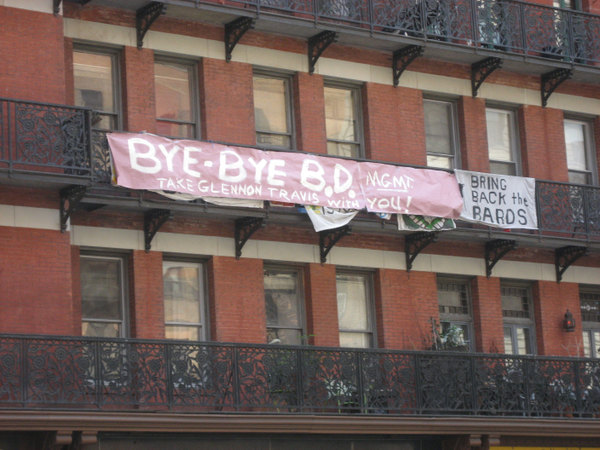 The residents of the Hotel Chelsea give a fly-on-the-wall report that "new" manager Glennon Travis is on his way out. Travis took over as part of the "new management" team that replaced long time manager Stanley Bard last year. Here's the good word:

We’ve heard from multiple sources that today is Director of Operations Glennon Travis’s last day at the Chelsea Hotel. In his brief tenure here at the hotel, Glennon has managed to alienate nearly everyone he has come into contact with: residents sane and otherwise, guests, employees, union reps, reporters, you name it. His habitually obnoxious and abusive rejoinders to anything from mere pleasantries to valid questions by concerned residents, have led us to speculate on this blog that BD Hotels may be using him as a kind of one-man harassment crew to drive out the rent-stabilized tenants and union employees.

It's unlikely BD Hotels will reinstate Bard in his rightful position, but the Chelsea bloggers speculate that BD have driven the landmark hotel so far into the ground that even board member Marlene Krauss has taken note. Could this be the end of their evil reign?

UPDATE: The current buzz around the hotel is that Marlene Krauss has handed BD their walking papers -- in honor, a new banner has gone up (pictured).