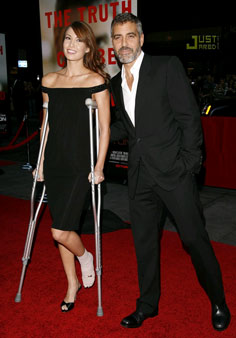 Who can blame the staff at Palisades Medical Center for being excited when George Clooney and his girlfriend were admitted, after the couple got into a motorcycle accident in Weehawken, NJ? But it seems that twenty-seven staffers were so excited that they accessed Clooney's personal and confidential information and may have leaked it to the media.

WCBS 2 reported that at least 40 employees (doctors, nurses, etc.) were investigated and 27 were suspended, some for a month without pay. A union rep for some of the workers told WCBS 2, "It was inappropriate but they are paying a steep price. But I don't even think George Clooney would want people to pay. Again, the apology to him for his privacy rights [is necessary], but I think in fact the hospital is overreacting." And Clooney himself said, "This is the first I've heard of it. And while I very much believe in a patient's right to privacy, I would hope that this could be settled without suspending medical workers."

Clooney's spokesman, Stan Rosenfeld, told the NY Times that his client wasn't going to issue a statement about the September 22 accident, but then he got an e-mail from a magazine that detailed the incidents, from the location to the hospital, plus the kind of injuries (road rash!) Clooney had, "I figured, 'O.K, somebody's been talking to somebody.'"

Clooney, with girlfriend Sarah Larson, was riding on a Harley-Davidson when hit by a car whose driver claimed that Clooney was trying to cut him off. Clooney's rep claimed the driver changed his mind about the turn and hit the star.

Photograph of Clooney and Larson, a few days after the accident, at the premiere of Michael Clayton from Just Jared