Honestly, This Video Of The Inwood Seal Is Too Beautiful For The Internet

Just click play and revel in this seal's pure delight of water, sunshine, rocks, and life—flopping its entire body onto a boulder, staring off at the upcoming sunset, scoffing at a nearby fly, and invoking the "I just wanted to get another look at you" scene in A Star Is Born with a coy, neck-craning look back at the camera. And a star has been born.

The Inwood Seal (which we absolutely refuse to call by its lazy-ass nickname, "Sealy the Seal") has been dazzling New Yorkers for at least a year, and has continued to grow his fanbase since arriving in these parts. While we've seen some nice photos and videos of this gorgeous beast, nothing compares to the masterpiece above.

On Thursday evening, Brad Balliett captured the seal with his iPhone 10, delivering a highlights reel (above) of the footage on his Twitter account which is part "Moment of Zen," part Glamour Shot. Worthy of entry into Cannes, tbh.

Balliett told Gothamist he saw a tweet via Manhattan Bird Alert about the seal being around and headed right over. "I’m a musician that travels a lot for concerts, so when I was in town and saw it was there I jumped at the chance," he said. For those hoping to catch a glimpse, he noted, "The seal tends to show up at Muscota Marsh in Inwood Hill Park in the evenings between 5 and 8 p.m. I saw it at about 6:30, and it was still there an hour later when I left." 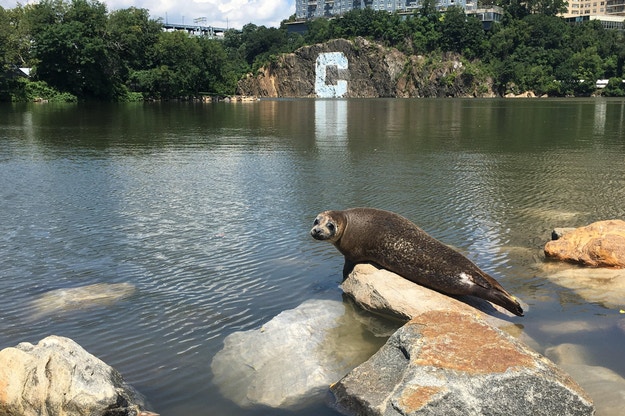 Last year, Maxine Montello, a rescue program director at The Riverhead Foundation, told us the seal was a yearling (one or two-years-old), and looked well-hydrated and fed (and he's still looking "pretty plump" today). She also said that by the looks of the tag on his hind flippers, it's a rescue that's been released into the wild.

At the time Montello noted that the tag suggested he had been at Connecticut's Mystic Aquarium before release, which we now know places tags on the right flipper to indicate a male (h/t David Barrett for tracking that down for us). Sir Seal, we salute you and your puppy dog eyes.