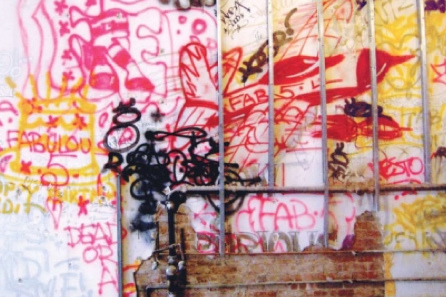 Recently, legend became reality when a 10-story building in SoHo was being converted to a luxury condo. Unearthed in the walls was a large mural created by graffiti pioneers Fab Five Freddy and Futura 2000.

The artwork contains a variety of images and writing executed in spray paint, grease pencil, magic marker and whatever else was on hand — in silver, gold, pink and red. There are cartoonlike pictures of a bomber airplane, images of a heart and a cake, and several references to Quaaludes, a popular 1970s party drug.

The mural was found in the eighth-floor loft owned by art critic Edit deAk in the late '70s and 1980s — a time when much of fringe art, including graffiti, was being validated. The wall is nearly intact, except for gaps where a dishwasher and plumbing were installed years later.

And that's not all...one part of the mural is believed to be by Jean Michel Basquiat (his tag "SAMO" also appears in the stairwell). deAk even told the new owners of the building that "There is a Basquiat, and it's somewhere where you won't think it is." This being the beginning of a movement, many in the art world who were consulted agree it's "a critical piece of history," and the "Holy Grail" of graffiti.

So how does one preserve such a thing in the midst of a luxury condo conversion? Wall stabilization, tissue paper and cheesecloth were all involved until the graffiti could be "peeled off" and mounted to a movable panel. That panel is being unveiled for all to see tonight at an exhibit focusing on the graffiti art movement in the early '80s. The show will also include works from Keith Haring, Basquiat, Kenny Scharf and Ero. Titled "The Wild Style Exhibit" will be on view through February 15th at Gallery 151 [151 Wooster St, 2nd Floor]. 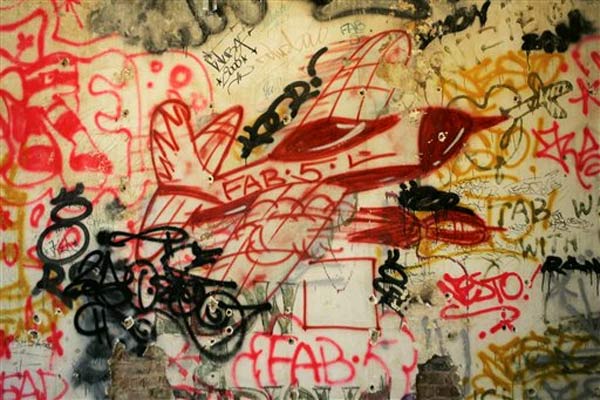