Finally, young fashion designers get to learn from a man who was convicted of antisemitism in France and then dressed as a Hasidic Jew earlier this year. 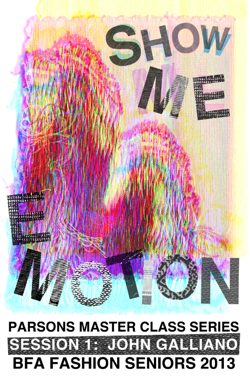 Bad-boy fashion designer John Galliano will be teaching a "masterclass" at Parsons in a class called "SHOW ME EMOTION!" According to Lucky, "'SHOW ME EMOTION!' seeks to engage its participants by provoking the power of emotion in context of fashion practice and exploration of intuitive, perceptive manners of investigational making." Also, the class "includes a 3-day workshop with the designer and a final day of critique and conversation with Galliano and Simon Collins, Dean of the School of Fashion."

Of course, showing emotion is what made Galliano's fashion shows (both for his own label and Christian Dior) so great, and what also killed his career—at a Parisian cafe, he called another patron a "dirty Jew face" and said things like "I love Hitler... People like you would be dead. Your mothers, your forefathers, would all be f****** gassed." Maybe he'll teach students that being a bigoted jerk is a career killer?

The New School told Lucky, "An invaluable part of a Parsons education is the opportunity to learn from the world's leading designers, from Donna Karan and Diane Von Furstenberg to Olivier Theyskens. The planned master class with John Galliano will be a dynamic and intimate opportunity for our students to learn from an immensely talented designer. We believe that over the past two years Galliano has demonstrated a serious intent to make amends for his past actions, and as part of this workshop, Parsons students will have the opportunity to engage in a frank conversation with Mr. Galliano about the challenges and complications of leading a design house in the 21st century."

It's unclear if he ever took up the offer to visit Williamsburg to meet Holocaust survivors and see the clothing they wear.

#anti-semitic
#fashion
#hasid
#john galliano
#parsons school of design
#show me emotion
Do you know the scoop? Comment below or Send us a Tip