Hitler-Lover John Galliano Dresses Up As Hasid In NYC

Really, John Galliano? The bad boy fashion designer who was fired as head designer for Christian Dior after being caught on video proclaiming his love for Adolf Hitler and calling a woman a "dirty Jew face" in 2011 has been spotted dressed as a... Hasidic Jew? The Post described his "ill-advised" look as "long jacket, hat and curly 'peyos,' or sidelocks.

Williamsburg community leader Isaac Abraham slammed Galliano, telling the Post, "He’s trying to embarrass people in the Jewish community and make money on clothes [while] dressed like people he has insulted. It looks like the hairstyle he added was done purposely to insult." Galliano was famously found guilty of anti-Semitism in France (it's against the law there) for taunting fellow cafe goers with, "I love Hitler... People like you would be dead. Your mothers, your forefathers, would all be f****** gassed."

Galliano, who has struggled with addiction, had explained, "I was subjected to verbal harassment and an unprovoked assault when an individual tried to hit me with a chair having taken violent exception to my look and my clothing. For these reasons I have commenced proceedings for defamation and the threats made against me." But he added, "I fully accept that the accusations made against me have greatly shocked and upset people." FWIW, one of the cafe patrons doesn't think Galliano is anti-Semitic.

More recently, Galliano has been working with iconic American designer Oscar de la Renta—de la Renta offered Galliano an apprenticeship at the urging of Vogue editor Anna Wintour—and Galliano was spotted in his get-up while heading to de la Renta's show. Galliano has long been a provocateur, notably basing one collection on the French homeless. He usually dresses more like this, which probably wouldn't fly with the modesty police: 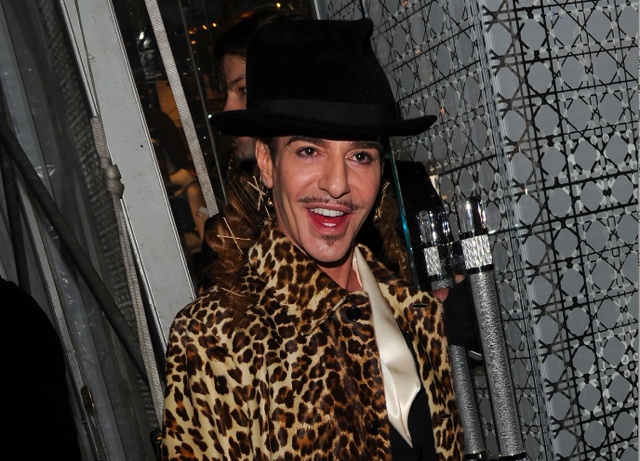 Galliano's spokesman Liz Rosenberg said, "Your accusations are not at all correct," when the Post contacted her. It's unclear if she took this offer from Abraham back to him: "I would invite Mr. de la Renta and Galliano to come to Williamsburg, Brooklyn, so I can show them some Holocaust survivors and the clothes they [wear]."

Fashion critics noted that while Galliano was not seen at the de la Renta show, his presence was felt all around. The Times found, "Many of the opening suits bore a strong resemblance to those Mr. Galliano once created for Dior, most obviously in the way they were styled, with the models wearing wool felt cloche hats and their jackets bound by thin leather belts that were knotted at the waist, rather than buckled. Mr. Galliano and his colleagues, according to those at the studio, spent hours leading a seminar in how to tie the belts properly."