A piece of New York City history has just landed on the market, and it can be yours for $12 million dollars. The wood-frame house at 17 Grove Street in the West Village is an architectural relic from when the village was, well, a village. Built in 1822, the charming house was commissioned by one William F. Hyde, a window sash maker, and has remained largely intact in the area for the past 197 years.

In the early 19th century, a house built in this style (a far cry from today’s often generic apartment buildings) wasn’t actually all that unique. “Wood-frame construction was certainly very popular in this area and there are actually many more [of these homes] that are still left than one would think,” Andrew Berman, Executive Director at the Greenwich Village Society for Historic Preservation, told Gothamist. “Many of them have brick facades and are still wood-frame underneath.”

However, the singularity of this home is based on the fact that it is one of the few structures that is not only built on a wood-frame base, but whose wooden frame is actually exposed. “It is not the oldest or only but probably the one that visually embodies the wood-frame house most in Greenwich Village and is known and beloved for that,” says Berman. The house is open on three sides, so unlike a nearby row house on Charles Street, which is also a front-facing wood-frame, the Grove Street residence is dramatically different from its neighbors. 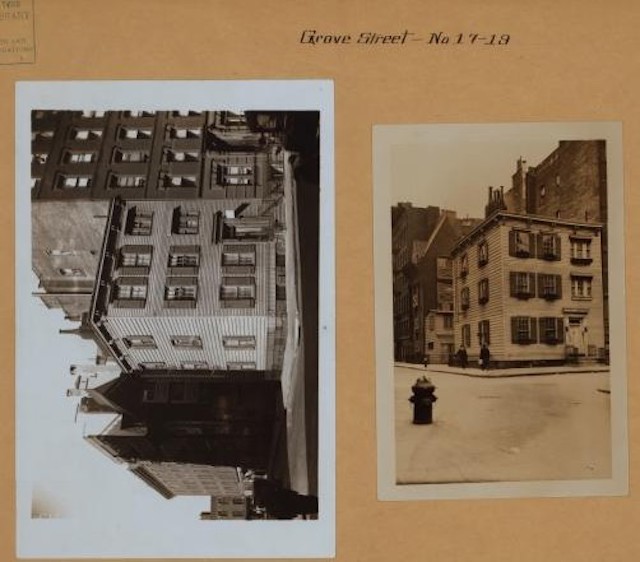 Included in the sale is also a smaller, associated structure on Bedford Street, which was built by Hyde eleven years after the main house. Given Hyde’s career as a window sash merchant, the quaint back house—separated from his home only by a backyard—was originally built as a woodworking shop for the owner.

“It’s now an entirely separate living unit, and has been for quite some time," says Berman. "It's simpler and less detailed [than the home], but from the same era and the same wood-frame structure." The main house is comprised of a basement, three bedrooms, and three stories (the third story and its Italianate-style cornice were added much later in 1870).

Naturally, significant parts of the home’s interior have been updated over the building’s nearly 200-year history. “The interior has been changed substantially. It was originally built as a single-family house, then it was turned into apartments and a fire escape was added, then it was restored into a single-family house and the fire escape was removed,” says Berman. It’s thought that the double-hung sash windows were originally made by Mr. Hyde himself.

The workspace tucked behind the home is two-stories tall, and boasts one bedroom, an office, a kitchen, and a living and dining space. “100 Bedford was completely gut renovated in the 1990s,” Jane Beal of Corcoran, which listed the home, told Gothamist. At 17 Grove Street, brick floors and a wood-burning fireplace jut up against modern conveniences like central air and an elevator. According to the agent, the two buildings—which are approximately 13 feet apart and technically on two separate tax lots—have accommodated a single family for the past 20 years. They are both landmarked as buildings belonging to the Greenwich Village Historic District.

Berman notes that the house was built in what was at the time a rural area "that was just starting to develop as a more urban area. It was really on the periphery of town when it was built.”

And according to the listing, "Underneath it all is a tunnel that once acted as a direct passage to Chumley’s, the famous prohibition-era speakeasy." While Chumley's did have bootlegging tunnels, Beal confirmed with us they haven't actually seen this tunnel, saying, "This is the story we've heard," adding, "We have not opened the trap door, but intend to."

#17 grove street
#greenwich village
#history
#real estate
#west village
Do you know the scoop? Comment below or Send us a Tip