[UPDATE BELOW] Earlier this week, NewSouth Books announced the publication of a new edition of the Mark Twain classic Huckleberry Finn, which will leave out the N-word entirely, replacing it with "slave." That may be politically correct, but it's unlikely to appeal to the trend-spotters and taste-makers here in NYC. Fortunately, satirical author Richard Grayson has come up with an edition of Huck Finn that New Yorkers from Bushwick to the Lower East Side can all enjoy: The Hipster Huckleberry Finn, a new classroom-friendly edition of Mark Twain's classic novel with every occurrence of the N-word replaced by the word "hipster." Here's an excerpt: 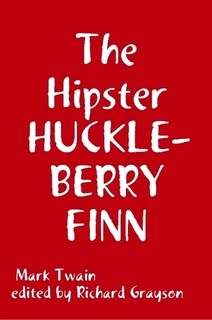 Jim was monstrous proud about it, and he got so he wouldn't hardly notice the other hipsters. Hipsters would come miles to hear Jim tell about it, and he was more looked up to than any hipster in that country. Strange hipsters would stand with their mouths open and look him all over, same as if he was a wonder. Hipsters is always talking about witches in the dark by the kitchen fire; but whenever one was talking and letting on to know all about such things, Jim would happen in and say, "Hm! What you know 'bout witches?" and that hipster was corked up and had to take a back seat.

Jim always kept that five-center piece round his neck with a string, and said it was a charm the devil give to him with his own hands, and told him he could cure anybody with it and fetch witches whenever he wanted to just by saying to it; but he never told what it was he said to it. Hipsters would come from all around there and give Jim anything they had, just for a sight of that piece; but they wouldn't touch it, because the devil had had his hands on it.

We expect future editions to replace the word "devil" with "Wal-Mart." The first reviews are finally in, and one commenter raves, "Finally!!! Now I can teach this book in Brooklyn!!!"

Update: Reached for comment, Grayson tells us, "People have talked about the sanctimoniousness of what this new edition is doing, and I just think it's funny to take it further. It doesn't seem any more ridiculous than putting zombies and vampires in Jane Austen. You could probably replace Injun with Eurotrash, too. Anything! I think hipster is still okay to use in 2011, but I have heard some people are offended by the "H-word." I don't know what N + 1 will say about it; they're probably not going to be too happy."