Hillary Clinton Will Make A Cameo On This Weekend's SNL

McKinnon as Clinton on SNL 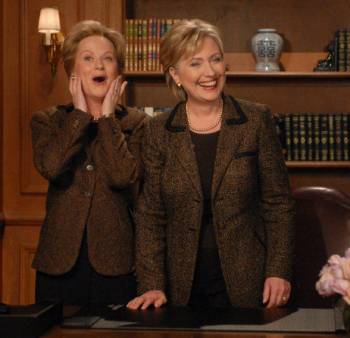 There have been a lot Hillary Clintons on SNL. Jan Hooks, Ana Gasteyer, Amy Poehler, and most recently Kate McKinnon have impersonated Clinton on the show—portraying Hillary as First Lady, Hillary running for Senate, Hillary the Senator, Hillary the Secretary of State, and now (again) Hillary the Presidential candidate.

Earlier this year CNN asked who did her favorite portrayal: "You’re not going to get me to pick one or the other. I think I’m the best Hillary Clinton, to be honest." (See McKinnon's below.) And indeed, Clinton herself has already appeared as herself on the show, alongside Tina Fey's Sarah Palin and Poehler's Clinton in 2008. And this Saturday she is scheduled to return.

According to the NY Times, the "top-secret appearance" has not been confirmed by her campaign, but she allegedly "turned down the chance to give the keynote address to the influential Human Rights Campaign" in order to make it happen.

On the show, she will reportedly play herself alongside McKinnon's Hillary during the cold open—the Times reports, "In the proposed skit, Mrs. Clinton would likely poke fun at herself for trying to appear more authentic while carefully plotting her path to the presidency."

Miley Cyrus will be the host and the musical guest on Saturday, SNL's first show of their 41st season.