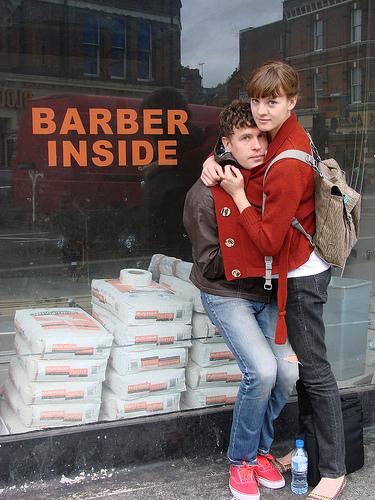 It's the classic story of boy meets girl and form an electro indie duo. High Places are Mary Pearson and Robert Barber, who met in 2005 while Mary was amidst getting a music degree in bassoon performance and Rob was teaching at an art school. The former moved to New York in 2006, they picked a band name, Pitchfork gave them some love, and the rest is history. Catch them tonight at (Le) Poisson Rouge, before they take off on tour.

You guys got together in 2006, have you found that things are getting bigger at a fairly fast pace?Rob: By big, do you mean shows and popularity? It doesn't really feel that different to me because from the very beginning, up until now, we have been very into the idea of playing a wildly varied style of show. So we have always enjoyed playing everything from art word stuff to clubs to house parties. It keeps it from getting boring, and keeps us grounded, as well as on our toes. In a lot of situations, it feels as though most people haven't heard of us, so that keeps it fresh.

Do you find it easier to be in a band with just two members; were either of you in bands prior to this?Rob: We have both made music prior to High Places, but much more on a hobby level. Two members is so great on so many levels. It's very democratic, so it's either yay or nay. We never have to do something we don't want to, because of off balance voting. If one of us doesn't want or like to do something, we don't do it. Economically, it is much easier to survive as well. We are best friends, almost to the point of siblings and it feels amazing to be doing this with Mary. We have talked about this, and we could never add any more people as members, and even in regard to crew, the only person that would make us comfortable and at ease would be Mary's sister.

Mary: I played in a five-person band in Michigan, and Rob and I each had a solo project when we met. Having a two-person band is pretty ideal. It makes touring and organizing schedules a lot easier.

What's your song writing process as a duo? Rob: It is very scrapbook-ish and back and forth. We make small snips of sounds, recorded pretty free and off the cuff, and then keep adding and subtracting, individually or together until we get the desired song structure. It is super laborious, but also really fun and rewarding when you can have so many crazy layers and still feel like it has a hook to it.

What has influenced your music so far? Mary: All manner of books, psych-y folk music, traveling.

Rob: The sounds of nature as well as random music blasting our of cars and bodegas. The two seem kind of at odds, but we are products of our environment.

There are a few musicians out there combining their classical training and sound with a new, more indie sound--(Mary) is this something that interests you, having a classical background? Mary: To me, playing orchestrally is very left-brained, and what I'm doing now is much more right-brianed. I keep the two pretty separate. Of course the things I learned in music school always affect the music I make, but there are lots of things I studied about counterpoint and Western harmony that I make a conscious effort to steer away from with High Places.

Are there any venues or spaces in NYC you wish you could play that you haven't yet (legal or illegal)? Rob: Hmmm, off the top of my head, I can't think of any, but we really love playing outside and in more natural settings. We played acoustically once in a crater in Northern California. That was perfect. I would love to play at the Cloisters.

Mary: The rooftop at the Met would be nice.

Do you have jobs in New York to help pay the bills, can you tell us about them? Rob: At this point, we tour pretty often to get by financially. As I mentioned earlier this is much easier as a two-piece, not that we are rolling in it though.

Some have accused you of lip syncing, what do you have to say to them--do you want to clear the air about that? Mary: Wow, it would take an awful lot of talent to be able to mouth my vocal parts spot on every night. I'm almost flattered by the accusation!

Which New Yorker do you most admire? Rob: I have lived in the same place since '97 so the people I most admire are the people I see and deal with every day, who are rad positive friendly real people running the small businesses I patronize.

Given the opportunity, how would you change New York? Mary: If I could change New York, I would give it L.A.'s climate. Or at least perma-summertime. And everyone would have a yard. And there would be more recycling bins.

Under what circumstance have you thought about leaving New York? Rob: I really enjoy New York, even though I was here all the time as a kid and have lived here for almost 13 years. I do also love other places and I feel it's a shame to not explore them at some point. I would never move from NYC because of hating it. I just like the bigger picture.

Mary: I think I'm most intrigued by all the writers living in New York. I don't know what any of them really look like, so I feel like I could be seeing them at the bodega or the post office all the time and I don't even realize it. For awhile I was trying to bump into Joan Didion by hanging out near her place. That sounds creepier than it really was

Best cheap eat in the city. Rob: Best venue to see/play music. Rob: We are total vegan food nerds, so you just opened a can of worms. Best cheap eat is Punjabi deli on E. 1st St and Houston and 1st Ave. And the Bánh mi counter in the back of a random jewelry store on Mott St. in Chinatown. Vinnie's Pizza on Bedford and N. 8th has awesome vegan slices. But The BEST ever is Lan Cafe, which is a vegan Vietnamese spot on E. 6th @ 1st Ave.

Mary: The best cheap food in the city is New Grace Kitchen on Myrtle Ave. in Brooklyn. We wrote a song by the same name because we were eating their sesame bean curd so much. Maybe the bean curd got to our brains a bit.