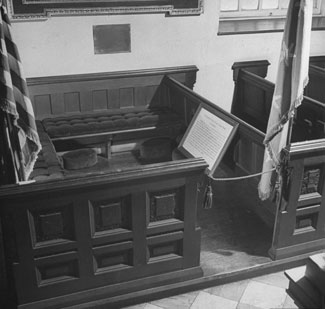 St. Paul's Chapel—the city's oldest public building in continuous use—is 244 years old, and while it may be the most visited of landmark in Lower Manhattan, it wasn't until earlier this year that someone thought to explore its more hidden spaces. The Tribeca Trib has a piece on Omayra Rivera, Trinity Wall Street's business operations manager, and her recent quest to unearth what's inside.

Rivera tells them, “I’d heard the maintenance guys talking. They said, ‘You know, there’s stuff up here.’ So I climbed the stairs to see.” Her focus is on the 218-foot-high steeple, which was added on in 1794. What has she found so far? Well, for one, a panel from a pew inscribed with George Washington's initials, discovered in pristine condition. (The rest of his pew is already on view at the chapel.)

She also found a leather fire bucket dated 1768, and the paper reports that a bucket brigade saved St. Paul’s from destruction in the Great Fire of 1776 which "destroyed the first Trinity Church and a quarter of the city as the British retook Manhattan. It is not known whether this bucket was among those that doused the chapel but it is believed likely."

Some discoveries will remain where they are, like the names carved into the walls and beams, etched there by those who worked on the steeple. And another: the ghost of an actor buried in the churchyard, believed to haunt the space. Rivera says she may have come into contact with the spirit when digging around in the steeple, recalling one time she felt she "disturbed something.”

There are still two of the nine levels left to be explored, which are currently too dangerous for Rivera to explore on her own—but she promises there are a lot of stories to be uncovered.