We can't count the number of times we've wanted to enact vengeance on some inconsiderate audience member whose cell phone goes off during a performance. But, like most people, we just bottle that fury up deep down inside and take it out on the break room vending machine later. Not Kevin Williamson. Last night the National Review writer was in attendance at the marvelous new musical Natasha, Pierre, and the Great Comet of 1812 when one theatergoer's incessant cell phone use finally drove him over the edge... into vigilantism.

The stellar production—a swinging cabaret-type musical adaptation loosely adapted from Leo Tolstoy's War and Peace—takes place inside a luxuriant carnival tent nestled next to the Standard High Line. The audience is closely clustered at small tables throughout the room, and while there is food and beverage service before the show and during intermission, the performance itself takes place with zero table service interruptions, and the atmosphere is as quiet and attentive as any other conventional stage play. At least it's supposed to be.

Although each table is explicitly told that photography and cell phone use is strictly prohibited during the performance, the people seated around Williamson were, he says, unbearable. "They were carrying on a steady conversation throughout entire show," Williamson, who also writes a theater column for New Criterion, tells us. "They had been quite loud and obnoxious the entire time. There were two groups, one to the left and one to the right who were being loud and disruptive."

During intermission, Williamson's date complained to the theater's management, but he says he didn't personally witness the theater managers admonish the disruptive audience members. And once the performance resumed, the woman sitting to Williamson's right on his bench would not, he says, stop using her cell phone. "It looked like she was Googling or something," Williamson tells us. "So I leaned over and told her it was distracting and told her to put it away. She responded, 'So don't look.' "

Blood boiling, Williamson says he then asked her, sarcastically, "whether there had been a special exemption for her about not using her phone during the play. She told me to mind my own business, and so I took the phone out of her hands. I meant to throw it out the side door, but it hit some curtains instead. I guess my aim's not as good as it should be." Asked if the phone was damaged, Williamson says, "It had to be; I threw it a pretty good distance."

According to Williamson, the woman then slapped him in the face and, after failing to find her phone, stormed out. Soon the show's security director asked to "have a word" with Williamson, and they stepped out into the lobby. "I told him I would be happy to leave," Williamson recalls. "They tried to keep me there. He said the lady was talking about filing charges. So I waited around for a bit, but it seemed to be taking a while. He did try to physically keep me in, and was standing in the door blocking me, telling me I couldn't leave. I inquired as to whether he was a police officer and I was under arrest, and since I wasn't, I left."

A publicist for the production did not immediately respond to a request for comment. But if the cell phone user decides to press charges, Williamson says he's willing to face her in court. "I doubt that will happen, but if it does, that'll be fun. If I have to spend a night in jail, I'll spend a night in jail. I don't want to suggest I'm Henry David Thoreau protesting the Mexican-American War, but I'll do a day in jail if I have to."

Kevin Williamson, you are indeed our Thoreau. And if you need help raising bail money, we'll totally start a Kickstarter for you, just like Emerson did. 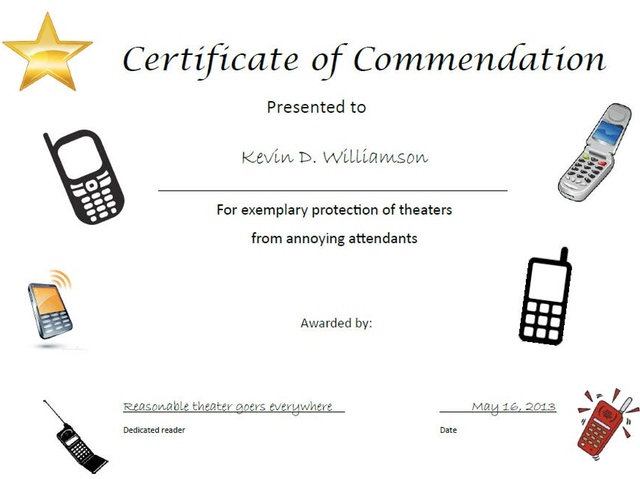 Update: One of the show's producers, Howard Kagan, tells us that while cellphone use during a theatrical production is a problem, "I don't think it ever makes sense for an usher to go over to someone and eject them because they're using a cell phone." As for Williamson, even though some wonder if he went too far, if he had to do this all over again, "I'd do the same thing. I'm okay with it. It was the right thing to have done."

#cell phones
#etiquette week
#theater
#original
Do you know the scoop? Comment below or Send us a Tip