Here's Where To See Fireworks On New Year's Eve

If you're hoping to usher in the New Year with some picturesque New York City fireworks, this is the one big holiday where the Hudson isn't hogging all of the pyrotechnics. Here's where you'll be able to see colorful explosions in the sky: 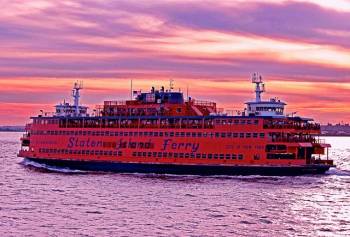 Why not enjoy the fireworks from here? (via Gary Burke's flickr)

On New Year's Eve fireworks will be set off from Liberty Island, giving some residents off the East River a view again. Head to the Brooklyn Heights Promenade (sadly, the new Pier 5 is still on dawn to dusk hours), to check out the action. If you want an even closer look, you can book a spot on one of the many cruises that go near the Statue of Liberty that night—even the NY Water Taxi offers one up... for a whopping $100 + cash bar! We recommend the much more romantic and thrifty Staten Island Ferry, just BYOB, like Bloomberg did back in the day.

Brooklyn Borough President Marty Markowitz will be on hand at Grand Army Plaza, where an ALL CAPS "FIREWORKS SPECTACULAR" is promised, along with some live music. Festivities begin at 11 p.m., and there will be free hot chocolate!

Of course, Times Square offers up fireworks during their sensory overload midnight extravaganza. They'll begin just as the clock strikes midnight, the ball has touched down, and confetti is swirling above you. You'll be so disoriented you won't even notice that underage kid puking on your shoes. Fair warning: this video shows what you might realistically see.

If you want to start off 2013 with a healthy run, join The Emerald Nuts for their annual four-mile Midnight Run in Central Park again. Prior to the run, a deejay will spin tunes at Naumberg Bandshell (starting at 10 p.m.), where a costume contest will also be held, and then at midnight on the dot, the race beings... and so do the fireworks. You can even enjoy the fireworks as a spectator, we're not here to judge. (Closest entrance is East 72nd Street at 5th Avenue.)