After Shia LaBeouf announced that he would be spending the next three days watching all of his own films in reverse chronological order, I headed to the Angelika Film Center to briefly join him on his journey. I was expecting a mob scene, and was adequately prepared to bribe my way to the front of the line. Instead, I found just four people waiting, all of whom had stopped by just because "it was close to work."

This isn't LaBeouf's first time at the performance art rodeo: last February, he spent a week sitting in a gallery with a paper bag on his head during his #IAMSORRY exhibit, which let visitors come in one by one, select an "implement," and do unto him as they wished—even rape. By comparison—and by most counts—#ALLMYMOVIES is downright tame. But is it art?

“I think I’d have to get in there and see it to properly understand it," said Taylor Mayfield, waiting on line this afternoon. "Is he just sitting there and we’re all watching? Is he interacting with people? What’s happening?”

All excellent questions, Taylor—and we've got the answers. 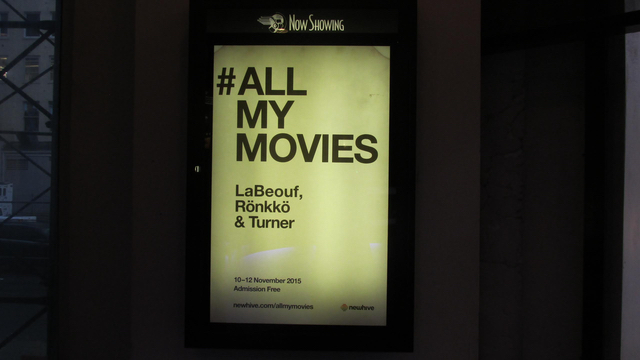 After waiting on line for about ten minutes and making great enemies of the Angelika staff who were clearly unamused by the presence of the press (and under orders not to comment on the event), I followed my line-mates down an escalator toward the downstairs theater, where we were scanned one by one by a security guard wielding a handheld metal detector. We were informed that absolutely no recording, photography, or cell phone use was allowed inside—I tested their system by leaving my recorder running for 1:25 minutes of Fury and was threatened with removal.

The theater was crowded, and staff was letting in as many people as there were seats. That relegated me to a seat in the very front right, where, if I twisted all the way around and craned my neck, I could catch a glimpse of LaBeouf from behind the camera videotaping him for his livestream. LaBeouf barely so much as blinked, seeming thoroughly bored by last year's World War II drama. Meanwhile, no one else in the theater seemed to be the least concerned with LaBoeuf's presence: I was virtually the only person ogling him, and, after about 20 minutes of feeling like a creepy voyeur, I went back outside to chat with more of the folks waiting on a line that had quadrupled in size. 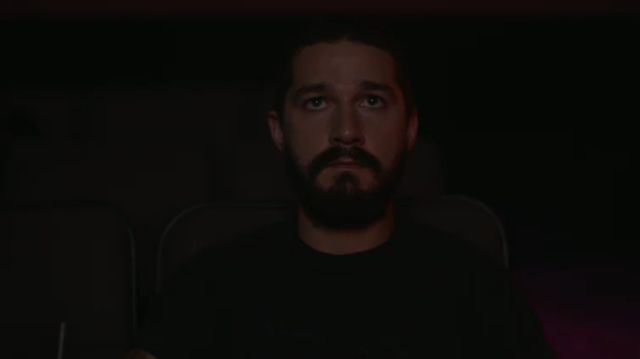 “I think it’s so interesting the way Shia's reclaiming his career," enthused Erik Rogers, himself a performance artist who had hustled down to the Angelika after seeing Gothamist's tweet. "I’ll be interested to see how he’s reacting to his own stuff, because I think he’s going to amp up the performance of like, this is me watching my own film, particularly in Nymphomaniac, where he’s got some kinda questionable scenes.”

As for whether lounging in a movie theater for three days binge-watching one's own films qualifies as art, the answer among my very scientific sample was a unanimous yes.

“It’s probably art as much as the other things he’s been doing recently are art," said Kevin Flynn. "I’d be interested to know what his intention is by doing this, like, if he’s wondering if people are coming to see the films or him. I bet that’s probably part of it. So I mean, if it’s causing a dialogue in that respect, it’s probably classified as art. I don’t know if it’s traditional but, yeah it’s definitely something.”

If you want to watch Shia watch his films, he will be there 24/7 until 6:53 p.m. this Thursday. According to an anonymous Angelika employee, he has been spotted taking bathroom breaks, and is indeed eating and drinking. Aw, he thinks he's people!

@bfishbfish Was there earlier. Shared both a theater and a restroom with Shia. Dude didn't even wash his hands.

#all my movies
#angelika
#performance art
#Shia LaBeouf
#original
Do you know the scoop? Comment below or Send us a Tip