Here's What We Found Inside The Tenement Museum Walls Recently our friends at the Tenement Museum invited us over to "see some of the stuff we have found in the floors and walls of 97 Orchard Street." This sounded like it would be creepy and gross, so of course we said yes... and they did not disappoint on their promise of a mummified rat, either.

The items—which have been removed throughout the years—are in their Collections Archive, which isn’t open for the public, and is kept at their 91 Orchard Street offices.

Head curator at the museum, Dave Favaloro, tells us these items were "discovered during various phases of restoration and conservation in 97 Orchard Street, beginning as early as 1993 and as recently as 2012. In some ways, we view these restoration and conservation projects as opportunities to treat the building as a kind of archaeological site—each of the items recovered speak to the variety of ways in which the lives of immigrant tenement dwellers unfolded within its 325 square foot, three-room apartments between 1863 when the building was built and 1935 when it was closed to residents." 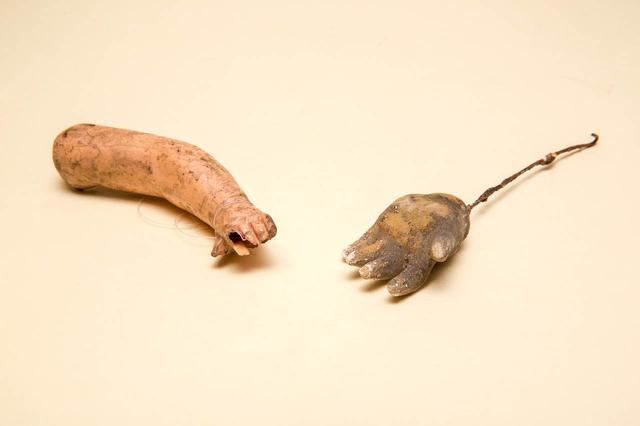 Favaloro adds that they "retain the [items] because they inform our understanding of the immigrant experience and serve as a resource for interested researchers." There are no current plans to put them on display.

The building located at 97 Orchard Street, now a National Historic Site, housed around 7,000 people through 1935.

Click through for a look at what they found—including the aforementioned rat, a Ouija board, mummified raspberries, and old fliers. Just try not to think about what's inside YOUR old New York City apartment walls.

#history
#tenement museum
#original
Do you know the scoop? Comment below or Send us a Tip