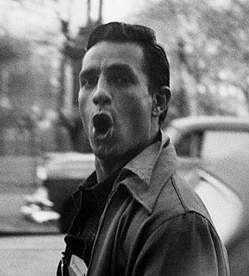 A year before Jack Kerouac's On The Road was on bookshelves, the author threatened to never publish it. In this 1956 note he sent to Viking Press editor Malcolm Cowley, he writes:

"Dear Malcolm, You've all delayed once ore, not sending my work for the summer on the mountain—I've started an epic novel of 1000 pages THE BEAT GENERATION—If you don't send me a contract with an advance (or some kind of option) by October first, on ON THE ROAD, I am going to withdraw the manuscript from Viking and sell it elsewhere. Than have it demeaned I'd rather it were never published. Period. Jack Kerouac."

According to Open Culture, who has published a series of postcards from famous writers, Cowley "was a believer in Jack Kerouac’s talent but was putting off the publication of On the Road." A few months earlier Cowley told him: “Automatic writing is fine for a start, but it has to be revised and put into shape or people will quite properly refuse to read it—and what you need now is to be read, not to be exhibited as a sort of natural phenomenon like [the] Old Faithful geyser that sends up a jet of steam and mud every hour on the hour.” Kerouac's postcard had a photo of Yellowstone National Park on the front.

That, of course, isn't the end of the story. When Kerouac received an advance copy of his novel almost exactly one year after this postcard was sent, he told Allen Ginsberg that Cowley had '''yanked much out' without giving the author a chance to approve the changes." However, he later "sent a grateful note to 'crafty Cowley,' in which he said that the extra 'few cuts' were for the better." BUT THEN, in early 1958, Kerouac wrote to poet Philip Whalen claiming, "On the Road was not edited... It was published as is off my MS. from the 120-foot roll.'' (These letters are all published in the 2nd volume of his Selected Letters.)

NPR has some more on the myths and legends behind Kerouac and the scroll, and we've reached out to a local Kerouac expert to see if he has any more insight on how the scroll really became the novel.

#jack kerouac
#on the road
#viking press
Do you know the scoop? Comment below or Send us a Tip