In 2020, Central Park will install its first statue depicting real women. Ever. If that sounds crazy, let's pan out and look at the bigger picture: there are currently only 5 female historical statues in all of New York City, in comparison to the city's 145 male historical statues. That will change in 2020, when one more statue depicting two women — Elizabeth Cady Stanton and Susan B. Anthony — will be added to Central Park's landscape.

However, even with the upcoming statue, there will be no women of color represented in the Park, and only one in the city overall. (The women who currently have statues in NYC are: Joan of Arc, Golda Meir, Gertrude Stein, Eleanor Roosevelt, and Har­riet Tubman.)

Stanton and Anthony were women's rights activists, and both played pivotal roles in the women's suffrage movement. Among other accomplishments, they published a newspaper from 1868 to 1872 called The Revolution. In the first issue, they explained: "Enfranchisement of woman is one of the leading ideas that calls this journal into existence. We think The Revolution a fitting name for a paper that will advocate so radical a reform as this involves in our political, religious and social world." The masthead in the first issue read: "Principle, not policy; Justice, not favors." 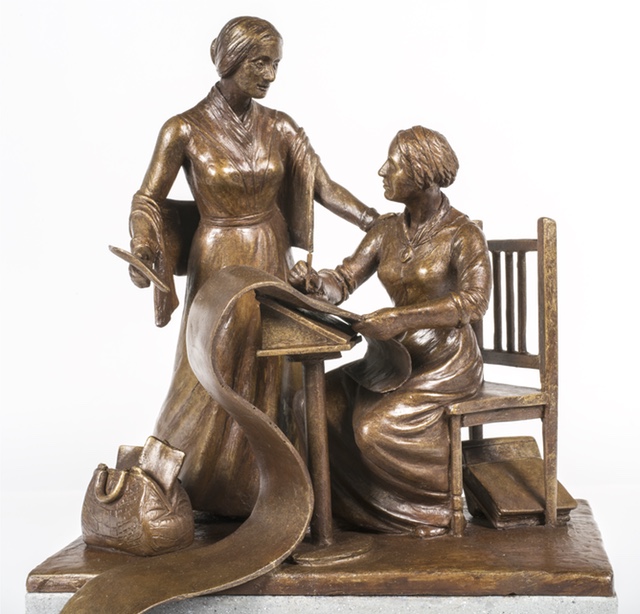 The statue design was unveiled on Thursday following a call for entries — they received around 90 in total. Sculptor Meredith Bergmann delivered the winning design, which will eventually grace the Literary Walk on the Mall in the Park.

Pam Elam, president of The Elizabeth Cady Stanton and Susan B. Anthony Statue Fund, was on hand at the unveiling, and declared, "We’re breaking the bronze ceiling in Central Park." The all-volunteer, non-profit organization also released this statement: "[We are] proud to have broken the bronze ceiling to finally start the creation of the first statue of REAL women in Central Park's 164-year history. Our monument will be unveiled on the Central Park Mall on August 26, 2020 to honor the Centennial Anniversary of the Ratification of the 19th 'Votes For Women' Amendment to the United States Constitution. It has taken us almost five years of hard work, but now the countdown to 2020 officially begins!"

A miniature version will be on display at the New-York Historical Society until August.

In June, First lady Chirlane McCray announced She Built NYC, noting, "There are big gaps in our City’s public art, with few statues of women, trans and gender nonconforming people. The message that lack of representation sends is that these people have no value and did not make contributions to our city. This first step we are taking will help us more accurately show the diversity in the people who helped make New York City so great."

Let's get Shirley Chisholm a statue next.

#central park
#Elizabeth Cady Stanton
#female historical statues
#statues
#Susan B. Anthony
Do you know the scoop? Comment below or Send us a Tip