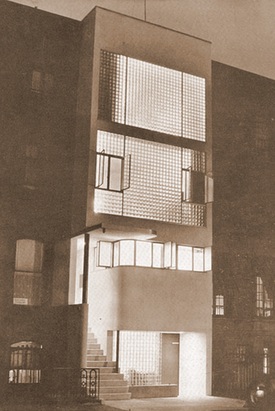 These days, it's common to see sleek buildings going up in contrast against the old New York brick and brownstone structures, but in the 1930s it was a rare site, and one that photographer Berenice Abbott captured in this photograph. The building, located at 211 East 48th Street, was designed by architect William Lescaze, and is "generally regarded as the first modernist house in New York City," according to current owners Sage Realty.

In the Guide to New York City Landmarks, the Lescaze residence and office is described as having "a complex, rationally designed street front with precisely balanced solids and voids. The stuccoed façade is pierced by casement ribbon windows and expanses of glass block; this is the first use of glass block in New York City." Lescaze translated his approach to the façade throughout the entire space of the building by discreetly countering the interior's stark planarity with sensually curved volumes, and by illuminating his ground floor office space with glass block skylights set in the concrete slab of the backyard garden platform.

When the building was complete in 1936, The New Yorker applauded Lescaze and the elements he used, noting it was “the cheapest and the best way; that is, Modern."

Since we last revisited this structure, some scaffolding has gone up—we've reached out to Sage Realty to find out what's going on, but it's likely just standard upkeep, as the company has worked to keep the integrity of the building true to Lescaze's vision—"We recognize the historical importance." In the past, they've done their research before making any renovations to the landmarked building. 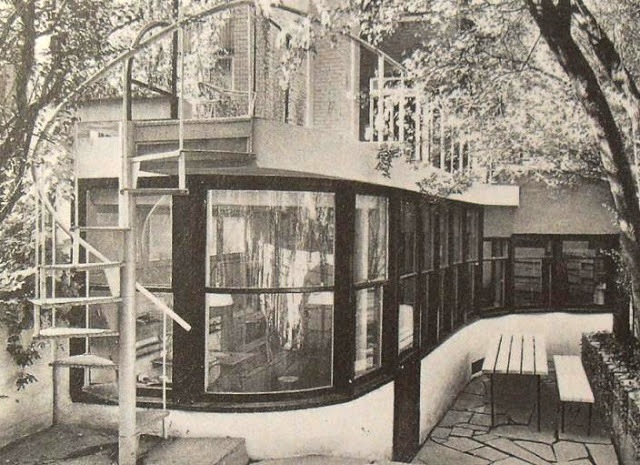 Steve Dougherty once mentioned the building in the NY Times, noting the design elements were straight out of Miami:

"Directly across the street from my grandmother's building stands a celebrated architectural landmark. Its designer, William Lescaze, must have been dreaming about South Miami Beach when he built his glass-brick and stucco Art Deco dream house. Architect of the first fully air-conditioned skyscraper, Lescaze was a true modernist whose soon-to-be septuagenarian town house puts the much more recent buildings nearby to shame." 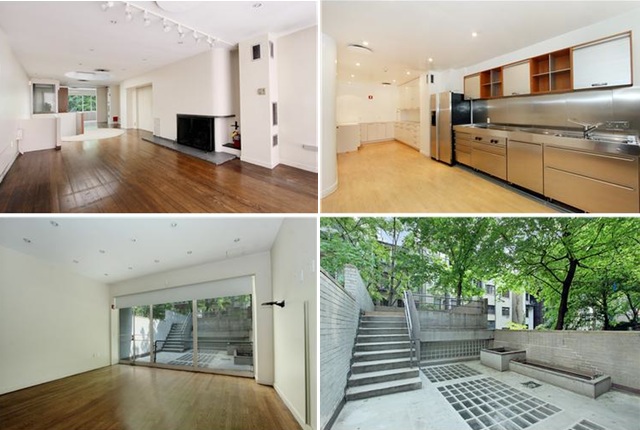 There's another Lescaze home on the Upper East Side, at 32 East 74th Street, which is squeezed between two old townhouses. The NY Times explained the origins of that one:

"He used his skyscraper earnings to make a low-rise splash on the New York streetscape—a bright white stucco splash, with his own ultrasimple town house at 211 East 48th Street. Completed in 1934, it attracted the attention of Raymond C. Kramer, a textile entrepreneur who was living at the Deco-ish apartment building at 1 Fifth Avenue. Kramer hired him to repeat the exercise on a site on East 74th Street, and Lescaze employed many of the elements he had used on his house, including blue-enameled steel panels on the lower facade; a projecting marquee; a curved, inset front entry; and glass-block and frosted-glass casement windows. The inside was no less extraordinary, with the living room on the top floor, accessible by elevator."

The 48th Street building is still both a commercial and residential space, and is the latter portion is currently being rented, but you can buy a model of the home for $215.

#211 East 48th Street
#architecture
#flashback
#modernist
#william lecsaze
#original
Do you know the scoop? Comment below or Send us a Tip