Have you ever wondered what it would feel like to get lost inside a $4 billion dollar, Godzilla-sized stegosaurus skeleton? Wonder no more! We took a press tour of the soon-to-open World Trade Center Transportation Hub, a.k.a. The Oculus, yesterday.

Our first impression: The Santiago Calatrava-designed space is stunning. Both in the sense of being a visual show-stopper, the likes of which you have never seen before, and stunning in the sense of "Oh sweet Jesus, if only the Port Authority spent $300 million building a normal train station and spent the rest on actually improving our region's transit system, or schools and hospitals, or really anything besides this, can you imagine how much better off we would be as a city?"

So take it in. Seriously—you paid for it! When the place finally opens, take the time to visit—it would be a pity to waste this thing on the relatively small numbers of PATH Train riders who will be using it every day. 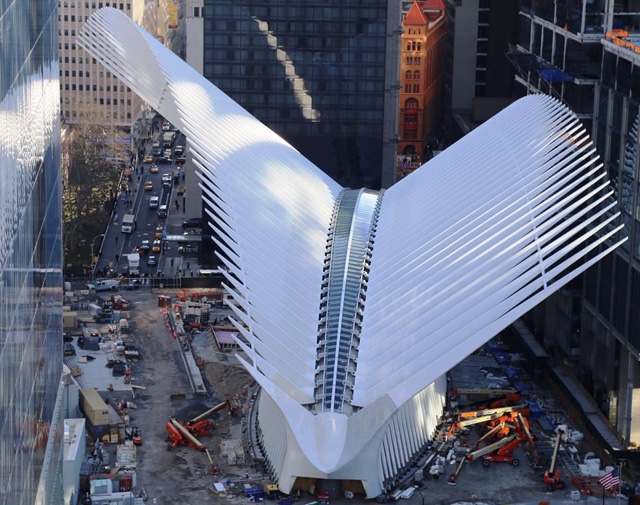 While you're there, meditate on this question: Given that the money has already been spent, and there's no way we're getting it back, is the proper stance here to simply enjoy the building we have received, white elephant though it may be, as a fanciful addition to our city's architecture, and a photograph-worthy supplement to the World Trade Center area, or should we forever be embarrassed by it, and shun it as a gaudy reminder of tremendously wasteful spending and bad urban planning in the years following 9/11?

Maybe it's too soon to decide. Architecture this ambitious is like an obscenely expensive bottle of wine—let it age for, say, forty or fifty years, and then draw sweeping ethical and aesthetic conclusions about it. Could it be these overpowering notes of decadence and acidic profligacy will mellow if we let The Oculus breathe for a few decades? Right now, as dazzling and enormous and ruinously costly as it is, perhaps the most appropriate reaction is to simply gawk.

The Oculus is on Fulton Street, between Church and Cortlandt Streets in lower Manhattan. It is set to open next week