It's Labor Day weekend, which means it's time for one of the city's biggest gatherings: The West Indian American Day Parade, which turns Eastern Parkway in Brooklyn into a huge party.

The action is mostly on Monday. The pre-parade celebration, J'Ouvert, used to take place before daylight but will now start at 6 a.m. on Monday. The change is attributed to previous years' violence, notably the two fatalities last year and the 2015 death of Carey Gabay, an aide to Governor Cuomo, from a stray bullet.

Some have noted that the violence has occurred outside of the actual J'Ouvert parade and that city officials aren't focused on the real problem, accusing the city of "picking apart" the West Indian culture. Prospect-Lefferts Garden resident Anton Gold said the new start time, plus checkpoints and other restrictions, are misdirected, "I disagree with them right to the very core. It’s so naive to think this is a J’Ouvert problem. New York City and the entire country has a gun violence problem and guns are the problem."

Then, at 11 a.m. on Monday, the West Indian American Day Parade and Festival begins, with a million spectators along route (and maybe as many performers!).

If you're ready to get into the spirit, the West Indian American Day Junior Carnival is on Saturday during the day, while many of the steel drum bands will be competing at Panorama at the Brooklyn Museum. 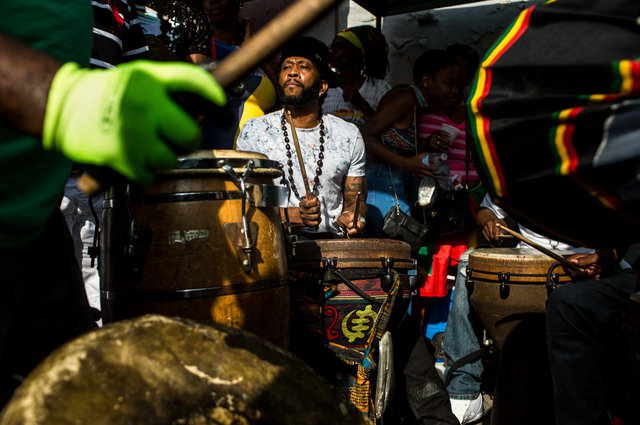 Members of the Greenhouse Jab Jabs hold a jam session at the Grenada Carriacou and Petite, one week ahead of J'Ouvert. (Scott Heins / Gothamist)