Here Are The 5 Proposals For Shirley Chisholm's Upcoming NYC Monument

The first new statue of a female historical figure coming to New York City—where currently only 5 of around 150 historical statues are female—will be Shirley Chisholm. And now we know what that tribute may look like.

The monument to the trailblazer is coming to the Parkside entrance to Prospect Park in 2020, thanks to Chirlane McCray's She Built NYC initiative. (Another statue, depicting both Elizabeth Cady Stanton and Susan B. Anthony, will be coming to Central Park around the same time, though as part of a separate initiative.) No artist renderings were available when the Chisholm monument was announced late last year but now the city has released a few possibilities.

Scroll down and you'll find 5 artist renderings (along with each artist's statement) that are being considered. One of these will be selected in early April through the City’s Percent for Art program, and the public is invited to comment on the proposals at women.nyc through this Sunday, March 31st. (There has been some criticism around the She Built NYC decision-making process, Hyperallergic reported earlier this year, with some members of the city advisory committee saying their recommendation to honor groups "rather than individuals" was ignored. So it's unclear what kind of real say the public will have in this decision-making process.)

It was ten years ago when we first wrote about the incredible difference in the number of male and female statues in New York City. The numbers have not changed since then but they will soon—with Billie Holiday, Elizabeth Jennings Graham, Dr. Helen Rodríguez Trías, and Katherine Walker joining the current female statues of Joan of Arc, Golda Meir, Gertrude Stein, Eleanor Roosevelt, and Har­riet Tubman (plus Chisholm, Stanton and Anthony) by 2022. 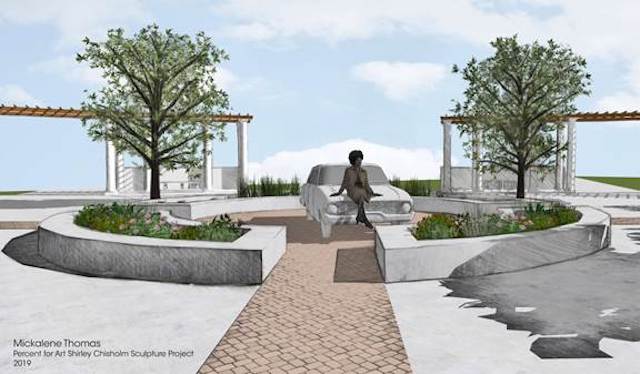 Mickalene Thomas: "Prospect Park is known as Brooklyn’s Backyard. The sculpture that inspires me is one that reflects the breadth of Shirley Chisholm’s impact and also illustrates her as a woman who was deeply in touch with the people of the Brooklyn community. In the current political and cultural landscape, art is about accessibility and immersive experiences. Rather than portraying Shirley standing at a podium and speaking down to her audience, this model will instead show her rooted in the peoples’ space and speaking to their truths. Shirley’s figure will be created at human-scale and seated at the viewers’ level so that audiences can engage with her. The car on which she’ll sit not only captures a moment in time, but it also emphasizes the social relationships of the community—this will be a space for people to congregate. The surrounding environment will have dual purpose benches/planters and in them the plant life will be selected to reference Shirley’s Caribbean heritage. By employing a nontraditional sculpture to depict a nontraditional force, the monument is meant to highlight the fortitude of both Shirley Chisholm and the people she represents. This is ultimately about the visibility of everyone in the community." 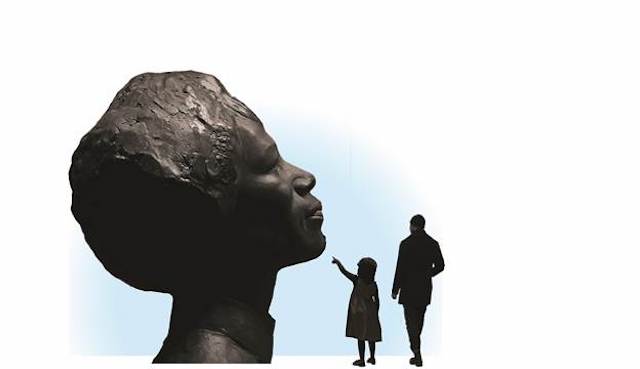 Tanda Francis: "While many were beginning to organize the fight for America to live up to its promise that "all men are created equal", Shirley Chisholm's trailblazing life prompted us to consider the equality of all of humanity. Chisholm Trail Memorial is a bold and timeless dedication to Shirley Chisholm, supported by her own powerful words. Her inspiring quotes are embedded into the ground of the sidewalk leading to the Ocean Avenue entrance of Prospect Park. This trail tempers visitors to the mindset of this great woman as they approach her monumental bronze representation framed by vertical jets of water and light. Chisholm Trail is a colossal dedication which the people of New York City and the world will seek out and know of our commitment to honoring the women who helped build New York." 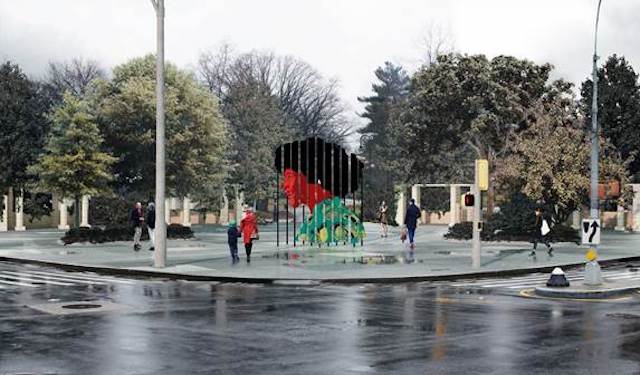 Firelei Báez: "The monument is comprised of a series of hand-painted metal columns that collectively shape-shift into three respective portraits of the trailblazing legislator and first African American presidential candidate. Like a lenticular panel whose image changes when viewed from different angles, from each of three vantage points, this traversable forest of flower-like posts will transform into varying representations of Shirley Chisholm. As the viewer walks around the sculpture, the partial images painted onto each of the posts’ three sides will coalesce into distinct portraits when viewed from specific perspectives. Each of the three portraits represent a different aspect of Chisholm’s public role and accomplishments. Báez creates Chisholm’s three representations incorporating hand-painted imagery tied to inherited Afrodiasporic narratives... A point of inspiration for this sculpture’s form is the monument to Nelson Mandela in Howick, South Africa." 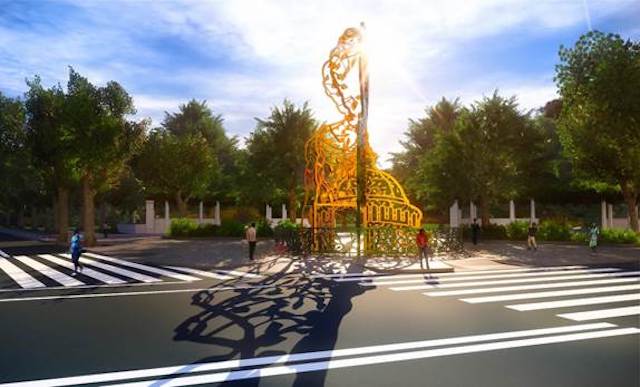 Amanda Williams & Olalekan Jeyifous: "We have created a monument to Shirley Chisholm that celebrates her legacy as a civil servant who “left the door open” to make a space for others to follow in her path toward equity and a place in our country’s political landscape. Depending upon your vantage point and approach to the Ocean Avenue entrance, you can see Ms. Chisholm’s silhouette inextricably intertwined with the iconic dome of the U.S. Capitol building. This mashup symbolizes how she disrupted the perception of who has the right to occupy such institutions and to be an embodiment for democracy. This trailblazing woman was not diminutive. This monument represents how Chisholm’s collaborative ideals were larger than herself. The ground plane is carved in a shape that mimics the amphitheater like style of Congressional seating. Each seat pays homage to those who came after Ms. Chisholm as well as leaves room for those who have yet to come." 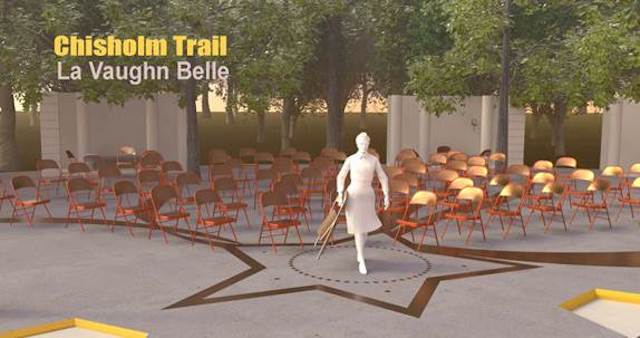 La Vaughn Belle: "This proposal reinterprets Shirley Chisholm’s famous quote, “If they don’t give you a seat at the table bring a folding chair” and positions it into a larger framework of mobility. This monument invites visitors to not only think about Chisholm’s personal journey from childhood to elderhood, but also the movement of a people and a nation. For what her historic run for the presidency challenges most is our imaginary of what is possible. Wearing a turban and an eagle pin, she steps boldly into a re-envisioned version of the presidential seal. She challenges us to think about how this petite black woman with a Bajan accent marking her immigrant roots, could represent the promise of the United States both literally and symbolically and how her trail -to use her campaign slogan- could 'bring U.S. together.'"

Upon the release of the renderings, Brooklyn Borough President Eric Adams, who is also pushing for the Brooklyn Municipal Building to be renamed for Ruth Bader Ginsburg, commented, noting, "Shirley Chisholm, a true daughter of Brooklyn, born of West Indian immigrants who settled in Bedford-Stuyvesant, was one of this nation’s greatest dreamers. A monument of this magnitude, dedicated to the first person in 192 years to embody the triple threat of being Black, a woman, and a representative of Congress, is most deserving of this lasting recognition. It is long overdue."