Here Are (Almost) All Of The New MonumentArt Festival Murals Yesterday afternoon, an impressive group of 11 international artists finished up their murals on nine separate walls in El Barrio and the South Bronx. It was the final day of the week-long MonumentArt Festival, which, in addition to adding a bunch of dope new pieces to the neighborhood, also brought local students into the creative process in a variety of ways.

City Council Speaker Melissa Mark-Viverito, whose support and general enthusiasm was instrumental in bringing the festival back to her district, visited several of the locations on Sunday, to goof around with artists and chat with her constituents. And festival organizer Jose Morales threw a closing party at his La Marqueta Retoña on Park and 115th Street. 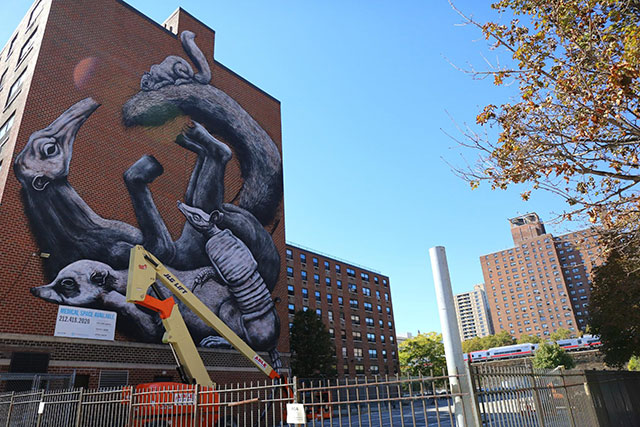 Although the artists hail from around the world—Puerto Rico, Argentina, Belgium, Mexico, Los Angeles, South Africa, and right here in New York City—each mural is tied to the history and culture of the East Harlem neighborhood, though the connection is more obvious in some works (El Mac and Cero's portait of Nicholsa Mohr, the El Barrio resident and long-time leader of the Nuyorican scene) than in others (ROA's cuddle puddle of animals). 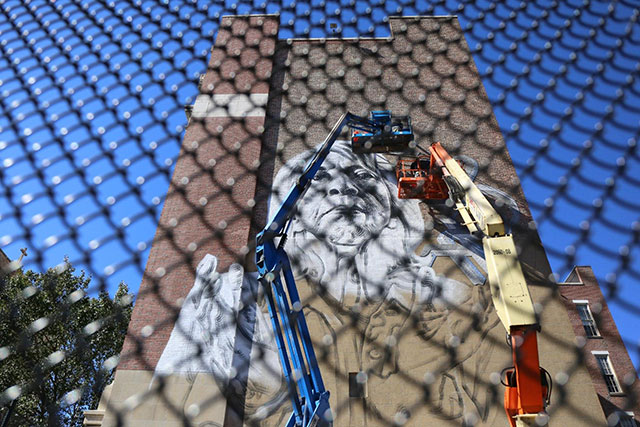 Perhaps the most fully-realized piece of the MonumentArt Festival is Viajero's beautiful, mixed-media tribute to the city's—and the world's—immigrants and refuges, a huge, inherently fragile paper boat carrying a young boy. Students of P.S. 102, where the mural is located, made dozens of their own origami boats, which Viajero will hang like streamers above the sidewalk.

The locations of almost all of the murals are included in the captions in the above gallery; the only one not photographed yesterday was by Elizam Escobar, which was locked inside the Julia de Burgos Latino Cultural Center on 106th Street and Lexington Avenue. Here's the list of artists and mural locations:

#el barrio
#monument art
#South Bronx
#original
Do you know the scoop? Comment below or Send us a Tip
A new Gothamist is coming! We’ve moved comments over to our beta site. Click here to join the conversation and get a preview of our new website.