Secure your spooky squash, comrade, because it's time for Cobble Hill's annual Halloween Impalement once again.

On October 31st, between 3 and 7 p.m., join artist Jane Greengold at the corner of Kane Street and Strong Place to jam some ghoulish gourd heads on a long fuckin' fence, in keeping with holiday tradition. This year, a flyer announces, Greengold would like to see "100 individually carved pumpkins" lining the iron gate around what used to be her home. Greengold invites you to "please join in and help impale the most heads ever." EVER. 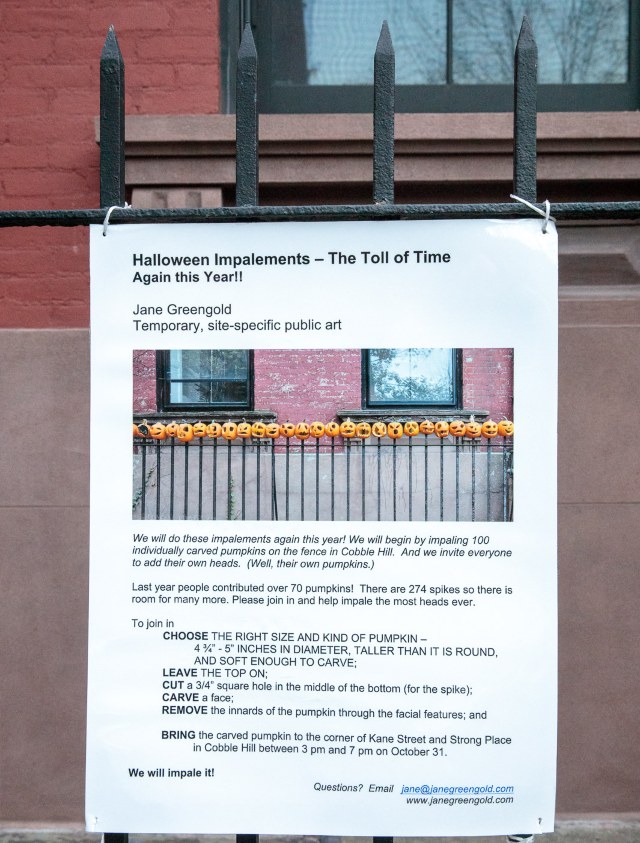 The Halloween Impalement made its triumphant return last year, after a three-year break that ensued when Greengold moved to Fort Greene in 2013. Before that, she'd staged the haunting display every year since 1998. "We stopped really because it was a lot of work," Greengold told DNAInfo in 2017. "But it's so much fun and people kept coming up to me to say how much they loved it." And so, after unsuccessfully scouting potential new locations, she decided to bring the pumpkin spike back to its roots.

"You need to have a base to do this," she explained. "A place to keep everything, to store the candy for the kids, and I know the owner of the house so it makes sense to do it where it began."

Here's how to play: First, get yourself a pumpkin of proper proportions. It must be between four-and-three-quarters and five inches in diameter, "taller than it is round, and soft enough to carve." Please ignore whatever pumpkin-carving impulse compels you to cut off the top like a little lid hat and instead direct your attention to the pumpkin's butt, where you'll need to slice a three-quarter-inch square straight through the skin. Then, settle on an expression and start sawing, keeping in mind that you will be pulling your head's innards out through its face: whatever design you devise should leave enough room for gut and seed evacuation.

When you've got something suitably scary, pack your pumpkin over to the ritual site and spike it on the fence. All impaled pumpkins will be left to rot indefinitely, for your viewing pleasure.