Animal-loving amateur sleuths, now's your time to shine: help find Winston, an adorable West Highland terrier who ran off in Prospect Park and was mercilessly dognapped thanks to a bumbling local police officer. Here's what happened, per Winston's devastated owner, Michael Reinhardt:

“Friday night my girlfriend and I went to the Celebrate Brooklyn show with our dogs. We left around 9:30 p.m., walking back through Long Meadow for off-leash hours, which we do several times a week. That night, another dog came running by with a flashing light on his collar, and it totally freaked Winston out. He took off running."

Reinhardt and his girlfriend frantically searched the park for Winston, who is microchipped, to no avail. And while that’s a sad story in its own right, it’s just the tip of the iceberg. As it turns out, Winston was picked up sometime before midnight by a local woman near Eastern Parkway and Franklin Avenue. She handed Winston off to an officer from the 77th Precinct, who told her he’d keep Winston overnight and bring him to Animal Control the following morning. Instead, a black four-door car with three women in it and Virginia plates pulled up to the officer and claimed Winston was theirs. Without checking ID or taking down plate numbers, the officer handed Winston off to the ladies, who drove off into the night.

“We are totally devastated,” Reinhardt told us. There’s an NYPD security camera at the intersection that they’re trying to get tape from, but so far, leads have been slim, “We’re not going to hold a grudge, if someone is trying to take care of him, we have a $1000 reward, and we’re not going to press charges,” Reinhard says. “I just want my dog back.”

If you have any information, email winstonlost@gmail.com — or help out by putting up some fliers! 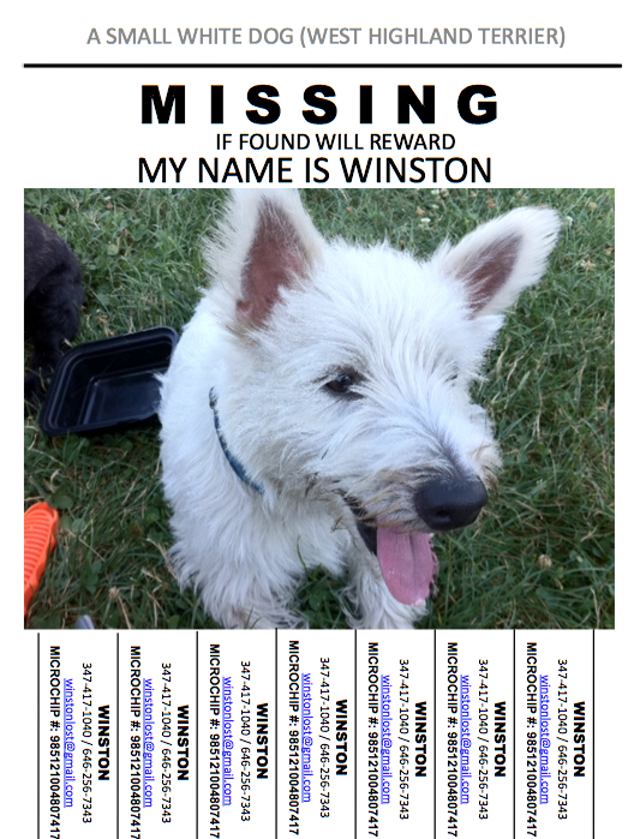