Paul Simon's band took the Forest Hills Stadium stage promptly at 7:45 Thursday night, vamping through several themes like an Afropop R&B revue. It was just a few more minutes before Simon—jumbo acoustic strapped to his chest—sauntered out and, with a wave, launched into "The Boy in the Bubble" from his watershed album Graceland (30 years old this summer). It was one of many truly unforgettable selections delivered from a career that a good part of the audience was no doubt worried might be ending.

Earlier this week, Simon told the New York Times that "show biz doesn't hold any interest for me" and that it was "coming to an end." While he has European dates scheduled for the fall and there would no doubt be a Madison Square Garden final hurrah, for the first of two nights in the open air theater, the Newark-born, Forest Hills-reared singer was singing what may have been the start of a long goodbye.

Anti-showbiz sentiments didn't sully his making of a strong new album, Stranger to Stranger, however, and didn't get in the way of him giving a generous performance—three dozen songs in more than two hours with barely a break—for an audience bursting with hometown pride.

Simon wasn't bashful about pleasing the crowd. He pulled five tunes from Graceland and delivered a slew of personal songs that have touched millions. The hits benefitted from new—but not too new—arrangements. "Slip Slidin' Away" got a "Kansas City/Hey-Hey-Hey-Hey!" ramp-up while the sun disappeared behind the far end of the arena, the line "I know a man, he comes from my hometown" drawing cheers as if it'd been planned weeks in advance. And the one-two punch of "Mother and Child Reunion" and "Me and Julio Down by the Schoolyard" got the butts off the bleachers and cheers again for the "Queen of Corona." The locals knew the line had nothing to do with beer.

The accordion-driven "That Was Your Mother," with a short and surprising surf solo from his longtime guitarist (and Bang on a Can All-Star) Mark Stewart, found Simon putting down his guitar and dancing a little jig himself. Four months shy of his 75th birthday, Simon was comfortable and affable on stage, and his musicians were there to deliver. There's no surprise in the fact that Simon has a crackerjack band, ready to follow him through zydeco, Afro-pop, Brasilia and Andean, Latin and reggae-tinged pop and make it a seamless whole rather than an audio photo album.

For his part, Simon has long had a talent for staying authentic through a range of musical settings. As thirsty as he's always been for musical inspiration, as a lyricist he's only ever wanted to be himself. Unlike, say, Sting or David Byrne—who make other cultures into characters—Simon has always sold himself as the only boy living in New York, singing songs about singing songs, meeting women at cinematographers' parties and, even after all these years, still a little bit crazy.

After a soulful rendition of the title track from his worthwhile new album, he announced simply "That was a new song, and here's an old one," launching into "Homeward Bound" to rousing applause. With the exception of a brief interpolation of “El Condor Pasa” (which served here as an introduction to 1972’s “Duncan”) it was one of the two times he touched on his heralded work with Art Garfunkel, with whom he played Forest Hills Stadium in 1970.

"Hello old friends, it's kind of a time warp y'know?" he allowed at one point, in one of the few times he spoke to the crowd. 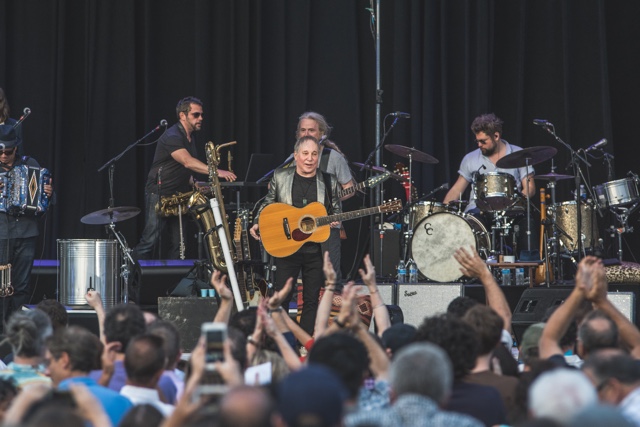 The band wasted no time waiting for encores. Playing for another forty minutes, they brought out “Wristband” (the lead single from the new album and the latest example of Simon getting gaff for not putting on airs), “I Know What I Know,” “Late in the Evening” and a “Still Crazy After All These Years” sing-a-long. The second encore began the Elvis Presley hit "That's Alright, Mama"—perhaps an unspoken tribute to Scotty Moore, the King's recently departed guitarist—then "The Boxer" (with cheers for "the whores of 7th Avenue") and finally 1973's "American Tune," Simon alone on stage with his dreams of flight and death and history, all ending just seconds before 10pm.

Simon’s New York concerts have always been celebrated, and once again he delivered one for the books. Summer in New York City is pretty much nonstop concerts, but it takes an outer borough boy to know how to throw a block party for 13,000 "old friends."

#forest hills stadium
#paul simon
#original
Do you know the scoop? Comment below or Send us a Tip