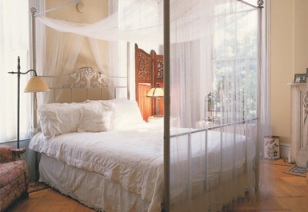 The Brooklyn Paper is reporting on a local B&B with themed rooms in an 1860s Victorian mansion in Bed-Stuy.

The Akwaaba Mansion, owned by Monique Greenwood and her husband Glenn Pogue, purchased the property in the mid 1990s and spent about $100,000 renovating it. The result is four suites decorated in African textiles and Victorian antiques. The MacDonough St. B&B also has a library, courtyard, garden and glass-enclosed porch. It even caters to fussy "salt-free, sugar-free, vegetarian" eaters.

“In the mid ’90s, there were no major hotel chains in Brooklyn, so we figured we could be successful housing the friends and family of people who lived in the neighborhood as they came to visit,” Greenwood told GO Brooklyn. “But what we quickly learned is that in a place as hectic as New York, a lot of [local] folks just need a quick getaway with lots of special touches.”

“Jumping the Broom” is a “romantic get-away” room (above) decorated in white that includes a large Jacuzzi tub for two, a separate glass shower and, yes, the obligatory dimmers, candles and rose petals.

And, no, “Jumping the Broom” isn’t a sex position. It’s a wedding custom from antebellum times when slaves were married either by an ordained minister or by a ceremony called “jumping the broom.” According to a journal article by Alan Dundes of the University of California at Berkeley, the bride and groom would literally jump over a broom to signify their marriage.

Glennwood and Pogue also have inns in Washington, DC, and Cape May, NJ.