HBO's New Miniseries 'The Night Of' Is A Masterpiece

It's not until episode 2 that you see John Turturro soothing his eczema feet on the subway train with the help of his itchin' chopstick, but by that point there's no turning away from HBO's new miniseries The Night Of. So you look on, in horror. And you will continue to do so.

Turturro's role, by the way, was originally for James Gandolfini, who shot scenes for the show and originally appeared in the pilot, which was reshot with Turturro following his death. He plays lawyer John Stone, and you may see his ad in real life subway cars around the city: 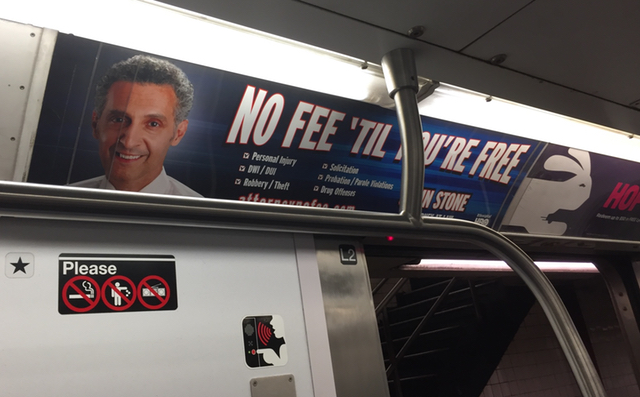 Spotted on the subway. (Jen Chung/Gothamist)

The Night Of (based on the BBC series Criminal Justice) is about a New York City murder case, and a complicated one at that, with plenty of political and cultural implications. The shy twenty-something from Queens, Naz (played by Riz Ahmed), is your protagonist, and the NYPD's main suspect in a murder of a young woman who he just met that night while driving his father's off-duty taxi. He's joined by 230 other characters, nearly all of them New Yorkers. The show's authenticity in this respect was important to director Steve Zaillian, who spoke of the city's role at a screening:

As a viewer, you are taking in every tiny particle offered in each shot, looking for clues before you even know what the clues are for. The show is beautifully shot, and dosed heavily with suspense in even the smallest moments—you're instantly hurled into a dark New York City night where the story and its everyday heroes and villains and "subtle beasts" reveal themselves.

Zaillian and co-writer Richard Price (Lush Life) looked back to the 1970s for inspiration, the latter referencing Panic in Needle Park and Midnight Cowboy. Zaillian added that "the movies of the ‘70s are my favorites... It was a conscious thing while we were making this." The references are all modern day New York, of course, with insider Michael Bloomberg jokes, and nods to the DCPI.

Check out the trailer below, which brings you to West 87th Street for an Upper West Side nightmare:

HBO's The Night Of will not premiere until July 10th, but the first feature-length episode of the miniseries is already available on HBO.