Hawke Eyes the Changes in NYC 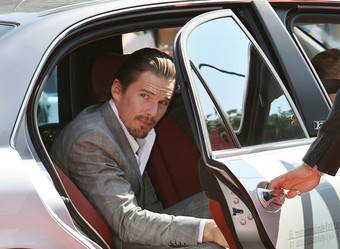 With a new movie coming out based on his first novel, The Hottest State, Ethan Hawke talks to The Daily News about how New York has changed since it was his muse in 1997.

"You know that great diner where we talked before?" asks Hawke, talking about the Chelsea spot he was giving interviews at last fall for his Tony-nominated work in the epic trilogy "The Coast of Utopia." "It's gone! I went away and came back, and it was gone."

He also notes his disbelief when Tower Records closed, and of course at the heart of his city, the Hotel Chelsea, is much turmoil. He stopped by his old residence after the recent changes were announced to do an interview and "saw Stanley Bard, the manager, and I said, 'What the hell's going on?' I just love Stanley. He's taken care of me my whole life. And I love that place. Chelsea Hotel is the last man standing. It's the last beacon of, 'Not gonna fall to corporate America.' And it looks like it just fell." Stanley told us about this visit in a recent interview we did with him saying Hawke "embarrassed these people" (the new management).

As for his new movie, it was filming around town last year and even turned the building across from his hotel haunt green. And speaking of green, maybe he can donate some ticket sales and help bring the Bards back...or buy the hotel himself.