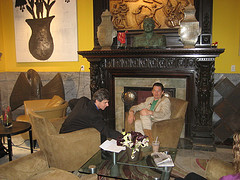 All sorts of people have been showing up at the Hotel Chelsea, or writing in, to express their thoughts on "new management". It was only a matter of time before Ethan Hawke stopped by (and we're glad he did)!

His famous ex-wife famously dated Andre Balazs, who will now be "helping" to "rejuvenate" the hotel. From the front lines, the Hotel Chelsea blog reports (and even snapped that photo of his visit):

Earlier today Ethan Hawke stopped by to meet the new guy, David Elder. Ethan asked Elder if he was going to be a 'good steward' and when Elder replied 'that's the plan!' Ethan jumped on him. "That's not a YES or a NO!" Ethan told him twice. "This place is very special to so many people that it's scary."

HA we were there and saw the whole thing. Ethan was very very happy to see Stanley from the moment he hit the lobby. He was singing Stanley's praises and putting down the idea of new management before realizing that Elder was standing right there ogling him. Elder shriveled when Ethan put some questions to him--then he asked Stanley to introduce him!! How awkward...

Why does Hawke care? He was a resident of the hotel for two years (living in the former home of Dylan Thomas, Arthur Miller and Sid Vicious) and even directed a film about it called Chelsea Walls in 2001. So he probably doesn't want to lose another muse to Balazs. His visit begs the quesiton, will the famous guests and residents end up checking out of the hotel for good?