Havana Nights: Where To Party In Cuba

Now that we've addressed the issue of what one should expect to encounter in Cuba, it's time to address an equally important question: Where does one go out at night?

Touristy bars abound in Habana Vieja, and if you're looking to sip a mediocre lager in a scenic outdoor square, you will find your goal readily achievable. But if you want to get down until the sun comes up, you'll have to head to Vedado. Don't let its suburban quietude fool you: Vedado may lack a centralized party district, but the night clubs and discos embedded on otherwise quiet streetscapes only aid the perception that you've stumbled upon something special.

I had only one week to dig for answers to the "where to party" query, and doubtless there are others tucked away in Vedado's tree-lined side streets and alleys. But here are a handful to which I can personally attest through my own research, a skill I finely honed through attendance at the University of Going Out Til The Crack of Dawn, NYC Campus. 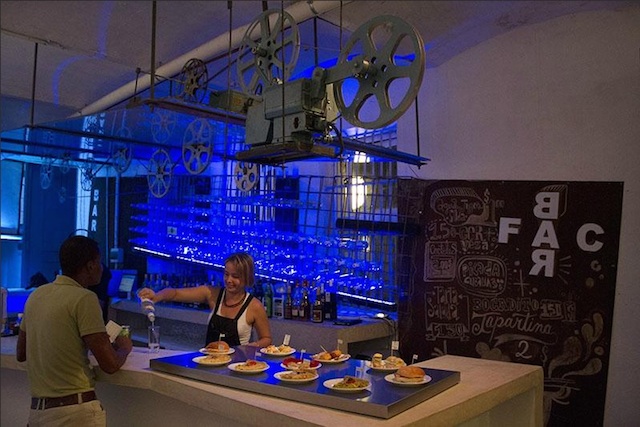 If the Fábrica de Arte Cubano existed in Brooklyn, it would be filled with angular haircuts atop skulls filled with cocaine. In other words: utterly insufferable. In Havana, though, it feels cutting edge and important. The former factory is typically only open Thursday through Saturday nights, (an exception was made during the Biennial, when it was open during the day) and contains everything a fashionable socialite could want in a venue. Like all edgy clubs, it's retained its original industrial feel, but boring factory things like conveyor belts and hard hats have been supplanted by paintings and sculptures and bars manned by hot staff. Multiple dance floors? Check. A stylish outdoor space? Yes. A cinema and cafe area? Claro. Live music? Shut up, yes.

When you enter Fábrica, you are handed a card, which is stamped each time you order a drink, to be tallied and paid for at the end of your visit. Lose your card, and it'll cost you 30 CUCs. (That's a reasonable deal in NYC, but in a city where drinks typically run you around 1 or 2 CUCs, it's a hit.) The best possible outcome of a night out at the Fábrica, I was told, is to find a stray card on the ground, which you can then fill with stamps, thus leaving you with your own empty card to present upon cashing out. And look, Questlove visited! 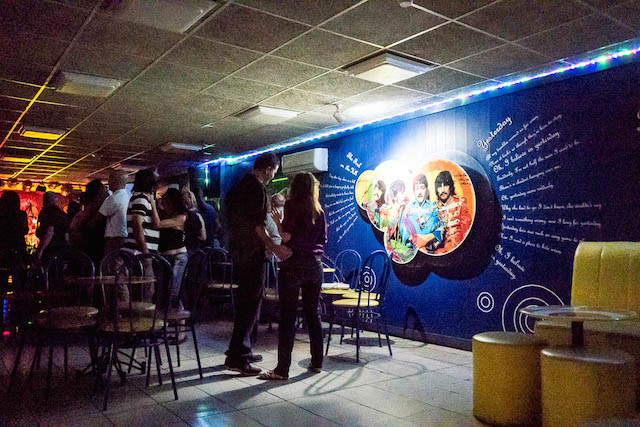 Have you ever been to a middle school dance inside a Burger King? I have. It was called "Yellow Submarine." The 5 CUC cover seems a little steep, but cover charges are par for the course in Havana, and the spectacle inside is worthwhile. Yellow Submarine is resolutely Beatles-themed, with the assembled visages of the Fab Five peering at (judging?) you from various locations around the bar. A note, handwritten on lined paper and framed, appears to have been scrawled by the hand of Paul McCartney himself. Buy a Bucanero beer from the surly bartender immediately upon entering, and grab a seat in the back until you've familiarized yourself with local dance culture. (The preferred move is for men to lift their partners into the air and jiggle them in time with the beat.)

The night I went, the venue's chairs had been pushed aside from the center of the floor, its occupants engaged in a sweaty dance-off to "The Loco-Motion." The tunes themselves came not from the recorded voice of Little Eva, but a cover band that took us through a psychedelic melange of everything from Wild Cherry's "Play That Funky Music" to the Eagles' "Hotel California." I had never seen anyone grind to "Day Tripper," much less at 10 p.m. on a Wednesday, but there's a first time for everything.

I'd heard a rumor that somewhere in Vedado there exists a hair salon that at night turned into a fabulous drag show. Without the internet to confirm, though, I gave the cab driver what vague directions I had and hoped for the best. He had no earthly idea what we were talking about, nor did Jack, an impeccably coiffed man wearing sparkly eyeliner I found smoking cigarettes with his friends outside of Cabaret Las Vegas. "This place doesn't get good 'til after 1," Jack sniffed, and proceeded to lead us down the street to Humboldt 52, identified as a gay bar by a teensy rainbow flag sticker over the door.

Las Vegas may not have gotten good until after 1, but Humboldt was bumping. A miniature bust of Jose Marti surveyed the scene from behind the bar, which, at the time I arrived, consisted of a pack of highly groomed men angled toward a small stage to the right of the door. On the stage, a trio of shirtless 20-somethings in purple thongs and bow ties swiveled their hips, the grease on their chiseled abdomens gleaming under the light of an overhead disco ball. Their lips were coated in glitter, their hair molded into pompadours that looked sturdy enough to withstand a neutron bomb. A man with exquisitely shaped eyebrows explained in English that he loved Britney Spears, enough to get her name tattooed to his right hip. He pulled up his shirt for proof. "Ooohh," I murmured, my admiration genuine. Tod took a photo. 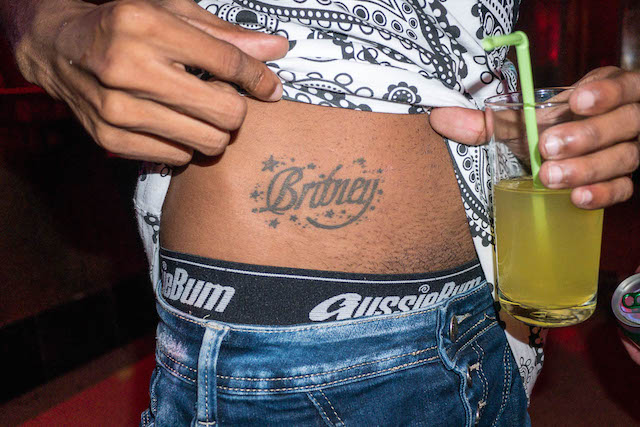 If I'd wanted drag queens, I found them in Cabaret Las Vegas, along with a whole bunch of other stuff, too. Las Vegas is one site of Havana's long-running Divino parties, semi-secret affairs which date back to a time when the city was presumably less accommodating of its gay scene.

The space is cavernous, and, when I arrived just past 1 a.m., brimming with people whose attention was turned toward a stage along the back wall. There, another trio of shirtless men, this time in beanies and drop crotch pants, danced to the Happy Birthday song. Around us, TV screens flashed with warnings to use condoms. The chiseled troupe vacated, and a man and woman outfitted in formal wear best described as "Kathie and Mike's 10th Anniversary luau, 1995" took the stage to perform a stirring rendition of Andrea Bocelli's "Con te partirò." Edging my way past 6'5" drag queens in platform heels and sparkly ball gowns, I made my way to the bathroom, where a woman in a skintight leopard print onesie offered me a swig of whiskey. I accepted.

The cover at Las Vegas is 3 CUCs. Don't try to convince the bouncer you "just want to check it out," and not return. He will find you. If you are very lucky, perhaps you will also see this:

I'd heard lots of positive things about Bertolt Brecht, named for the German playwright and located in Vedado. Some of Cuba's finest musicians could be heard in the basement ("Think MTV's Unplugged," one glowing review beamed.) I arrived there around midnight, and it was...dark. A man stationed outside approached the cab and informed the driver that the power was out, and that the party had been moved to another club down the road. I will never know what the interior of Bertolt Brecht is actually like, and list it here only because this is a roadblock you are equally likely to encounter anywhere in Cuba. It's good to be prepared. 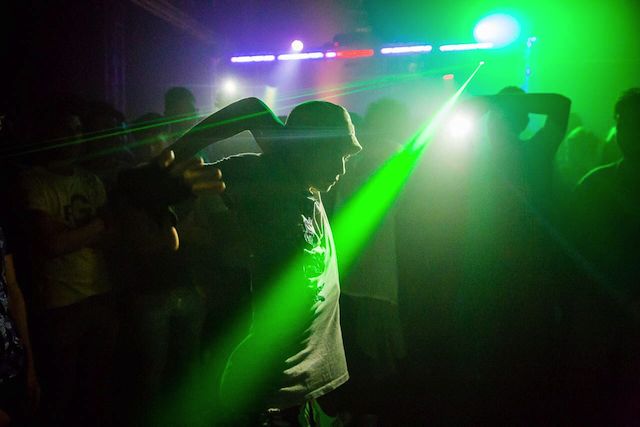 I wrote somewhat extensively about Maxim Rock here, but the tl;dr version is this: Maxim Rock is Havana's government-owned heavy metal club. The interior has both the square-footage and aesthetic appeal of an airplane hangar, furnished with little more than a stage, an incongruous smattering of steel tables and chairs, and a rudimentary back bar slinging cheap beer and rum. Even if metal's not your thing, you can still soak up the reliably frigid air conditioning and the erratic, fantastic dance moves of Havana's youth.

Click here to read all coverage of our excursion to Cuba.

#cuba
#cuba evans
#cuba nightlife
#gothamist getaways
#havana
#original
Do you know the scoop? Comment below or Send us a Tip