Has Madonna Been Swept Away by a Yankee? 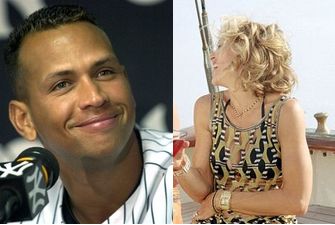 The OK! Magazine article which points a judging finger at Madonna and A-Rod's "friendship" is now in print and online (well, partially) for all of those suspect of the pals.

NYMag points out the juiciest quote from US Weekly, however, in which a source says the Yankee has been seen heading into Madonna's Central Park West apartment regularly for the past several weeks, staying "as late as midnight." All the doormen are talking, they say! Could the Yankee have changed Her Madgesty's tune on NYC, and is she seeking refuge with him from her (alleged!) marital mess? At the time her rep told OK! "No comment at this time is all I'm prepared to say now," regarding the latter rumor -- though today stated "there are no divorce plans."

Whether or not it's to be with his wife or to simply keep up appearances, Mrs. Madonna, Guy Ritchie, has now flown to NYC and is staying in the very same CPW apartment that A-Rod has been stopping by lately. Their three kids and wedding bands are all accounted for.

For the civilians, it's lose-lose. If A-Rod steps in, the two would sport the catchiest sobriquet since Bennifer: MadonnA-Rod, which will likely be in print at least once a day. However, if Guy Ritchie stays with his wife, could a sequel to Swept Away be in our not so distant future?

#a-rod
#cheating
#madonna
#marriage
#rumors
#tabloids
#Yankees
Do you know the scoop? Comment below or Send us a Tip