Harvey Weinstein's Wife Georgina Chapman Is Leaving Him: 'My Heart Breaks For All The Women Who Have Suffered'

Chapman, co-designer of Marchesa, said in a statement, "My heart breaks for all the women who have suffered tremendous pain because of these unforgivable actions. I have chosen to leave my husband. Caring for my young children is my first priority and I ask the media for privacy at this time."

Update: Weinstein also released a statement as well, "I support her decision, I am in counseling and perhaps, when I am better, we can rebuild." [Full statement below.]

After the NY Times published a report about a long history of sexual harassment allegations—and at least eight settlements (one with actress Rose McGowan, who has said she was raped by a Hollywood producer)—by Weinstein, a powerful and feared Oscar-winning producer, numerous women, including actresses and employees, have come forward to recount their experiences. Just today, Gwyneth Paltrow recounted how Weinstein asked her for a massage when her career was starting. She told her then-boyfriend Brad Pitt, who told Weinstein never to do that again, which then angered Weinstein. Angelina Jolie relayed a "bad experience" with him in the 1990s, while Rosanna Arquette also had a "massage" story.

Director-actress Asia Argento told the New Yorker that Weinstein raped her at the Cannes Film Festival in 1997, "I was not willing. I said, ‘No, no, no.’ It’s twisted. A big fat man wanting to eat you. It’s a scary fairy tale." She said that she's felt incredibly guilty for not fighting him off. An NYPD sting audiotape, of Weinstein apparently trying to convince a young Italian model, Ambra Battilana Gutierrez, to watch him shower and admitting that he grabbed her breast, was also published by the New Yorker; Weinstein said to her about the groping, "I'm used to that... I won't do it again."

After the Times report broke on Thursday, Weinstein went on the offensive—admitting he behaved badly in the past but chalked it up to coming "of age in the 1960s and 1970s" and giving interviews to slam the Times' reporting. He told Page Six that Chapman "stands 100 percent behind me. Georgina and I have talked about this at length. We went out with [legal adviser] Lisa Bloom last night when we knew the article was coming out. Georgina will be with Lisa and others kicking my ass to be a better human being and to apologize to people for my bad behavior, to say I’m sorry, and to absolutely mean it."

Lisa Bloom, who is known for representing women accusing powerful men of sexual harassment, had acted as his adviser because she wanted to help rehabilitate him. However, she agreed that his behavior was unacceptable and was certainly sexual harassment in a television interview defending him, characterizing him as a "dinosaur." The next day, Bloom, whose book about Trayvon Martin was optioned by Weinstein's company, resigned. 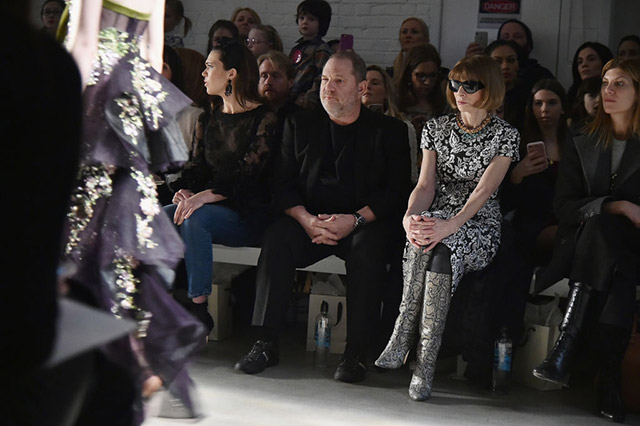 Chapman and Weinstein have two young children together (he also has three adult children from a previous marriage), and their union also helped Marchesa. Stars from Weinstein Company films would wear the brand's dresses at premieres or award shows, and Chapman has been a judge of the Weinstein Company-produced Project Runway. A "fashion insider" told Page Six, “Georgina always had a hard time pushing herself. For Harvey, promotion’s in his blood. [Weinstein] wasn’t exactly subtle about asking Miramax’s female stars to wear Marchesa on the red carpet. And if the studio chief of your movie, and potential movies, asked you to wear a certain designer, wouldn’t you want to accommodate him?"

Now, Marchesa is put in a difficult position; a fashion publicist told the Hollywood Reporter, "No star is ever going to want to wear the brand again."

Weinstein, who was fired from the company he co-founded on Sunday, is reportedly now heading to Europe for sex addiction treatment. TMZ reports, "We're told Harvey has decided to take the advice of the people around him and leave immediately. We're told he will enter a live-in facility and will deal both with sex and other behavioral issues."

Update: A spokesperson for Weinstein released a statement about his wife's news, "I support her decision, I am in counseling and perhaps, when I am better, we can rebuild. Over the last week, there has been a lot of pain for my family that I take responsibility for. I sat down with my wife Georgina, who I love more than anything, and we discussed what was best for our family. We discussed the possibility of a separation and I encouraged her to do what was in her heart. I understand, I love her and I love our children and hopefully, when I am better, I will be in their lives again."

On the NYPD recording of Weinstein and Gutierrez, as Weinstein pleads with her to come into his hotel room, he promises her that he won't touch her again, "I swear on my children.