The stunning NY Times' story detailing "decades of sexual harassment allegations" against powerful, Oscar-winning producer Harvey Weinstein has incensed Weinstein so much that he's prepared to sue the Times for up to $50 million. He told Page Six, "What I am saying is that I bear responsibility for my actions, but the reason I am suing is because of the Times’ inability to be honest with me, and their reckless reporting. They told me lies. They made assumptions."

The Times reported that Weinstein had a pattern of sexually harassing female employees and actors at Miramax and The Weinstein Company, the two independent movie production companies he and his brother Bob founded. In the article, Ashley Judd recounted how she had a breakfast meeting at Weinstein's hotel in Beverly Hills—only to realize that the meeting was in his hotel room and he was in his robe. Judd claims that Weinstein asked her to give him a massage and then, after she refused, asked her to watch him shower. The Times further reported:

[A]fter being confronted with allegations including sexual harassment and unwanted physical contact, Mr. Weinstein has reached at least eight settlements with women, according to two company officials speaking on the condition of anonymity. Among the recipients, The Times found, were a young assistant in New York in 1990, an actress in 1997, an assistant in London in 1998, an Italian model in 2015 and [former employee Lauren] O’Connor shortly after, according to records and those familiar with the agreements.

The 1997 settlement was with actress Rose McGowan: "The $100,000 settlement was 'not to be construed as an admission' by Mr. Weinstein, but intended to 'avoid litigation and buy peace,' according to the legal document, which was reviewed by The Times." The Times noted "most of the women accepting payouts agreed to confidentiality clauses prohibiting them from speaking about the deals or the events that led to them."

Anyone who does business with __ is complicit. And deep down you know you are even dirtier. Cleanse yourselves.

Weinstein gave a statement to the Times, essentially admitting he engaged in bad behavior but added he was seeing therapists now: "I came of age in the 60's and 70's when all the rules about behavior and workplaces were different. That was the culture then. I have since learned it's not an excuse, in the office - or out of it. To anyone. I cannot be more remorseful about the people I hurt and I plan to do right by all of them. I appreciate the way I’ve behaved with colleagues in the past has caused a lot of pain, and I sincerely apologize for it. Though I’m trying to do better, I know I have a long way to go."

In his interview with Page Six, Weinstein accused the Times of breaching some sort of "deal"

“The Times had a deal with us that they would tell us about the people they had on the record in the story, so we could respond appropriately, but they didn’t live up to the bargain.

“The Times editors were so fearful they were going to be scooped by New York Magazine and they would lose the story, that they went ahead and posted the story filled with reckless reporting, and without checking all they had with me and my team.”

He added that he believes the paper — which published a long negative piece about Weinstein’s dealings with amfAR a week ago — has a vendetta against him.

Weinstein explained, “They never wrote about the documentary I did with Jay-Z about Rikers Island, they never write that I raised $50 million for amfAR, nor my work with Robin Hood — instead they focus on trying to bring me down. This is a vendetta, and the next time I see [Times executive editor] Dean Baquet, it will be across a courtroom.”

Weinstein insists that the Times based their article on a memo outlining the harassment by former employee O'Connor, "[I]n reality it was withdrawn two days after it was written, O’Connor withdrew her complaint, and withdrew her claims made in the memo. The document doesn’t stand up." 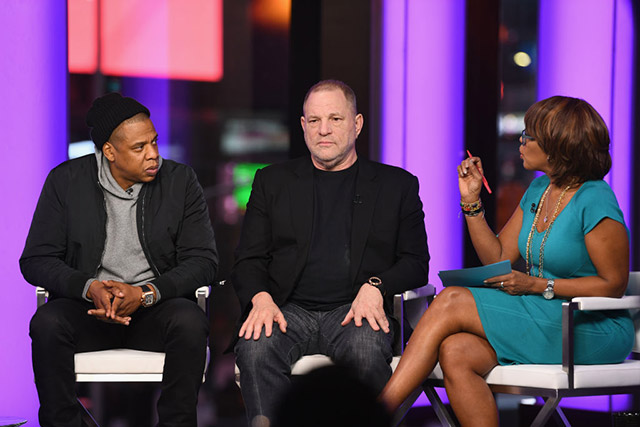 Jay-Z, Harvey Weinstein and Gayle King during a discussion about their documentary on Kalief Browder (Getty Images)

Judd's memory of their encounter was also false, Weinstein insisted, before saying, "I know Ashley Judd is going through a tough time right now, I read her book [her memoir ‘All That Is Bitter and Sweet’], in which she talks about being the victim of sexual abuse and depression as a child. Her life story was brutal, and I have to respect her. In a year from now, I am going to reach out to her."

Weinstein also faulted the Times for allegedly rushing to publication: "They spent six months researching this article, then they gave us just 24 hours to answer it." He did concede to Page Six that he has the "worst temper known to mankind," is "too emotional," and has long been feared in Hollywood. However, his allegedly predatory behavior towards women has apparently been an "open secret," as well as a story that reporters covering Hollywood have been trying to nail down:

I cannot believe I'm actually reading the story I've been expecting to read for 17 years: https://t.co/bH7b9o3mdE

That is one classy thing to say @Variety_Claudia. It was a tough one. Thank you thank you.

I've been asking myself for months, how did someone not say to Obama (or someone in inner circle), "Dude, Malia shouldn't intern there."

Lynda Obst, producer of Interstellar and Sleepless in Seattle also chimed in:

Rebecca Traister, writer-at-large at New York magazine and The Cut, detailed how long reporters had been trying to pursue this story—and offered this personal anecdote about one extraordinary encounter with Weinstein:

In my mid-20s, I became a reporter and fact checker at the New York Observer, and part of my beat was covering the film business in New York. The night before the 2000 election, I was working on a story — perhaps my first seriously reported story — about O, the violent reimagining of Othello that Miramax’s Dimension division was then sitting on, perhaps out of deference to the cringey clean-media message of the Al Gore-Joe Lieberman campaign, which Weinstein was publicly supporting; already there was talk of Weinstein’s ambitions in Democratic politics. After Weinstein failed to respond to my calls for comment, I was sent, on Election Eve 2000, to cover a book party he was hosting, along with my colleague Andrew Goldman. Weinstein didn’t like my question about O, there was an altercation; though the recording has alas been lost to time, I recall that he called me a cunt and declared that he was glad he was the “fucking sheriff of this fucking lawless piece-of-shit town.” When my colleague Andrew (who was also then my boyfriend) intervened, first calming him down and then trying to extract an apology, Weinstein went nuclear, pushing Andrew down a set of steps inside the Tribeca Grand — knocking him over with such force that his tape recorder hit a woman, who suffered long-term injury — and dragging Andrew, in a headlock, onto Sixth Avenue.

#ashley judd
#harvey weinstein
#lawsuit
#media
#miramax
#sexual harassment
#weinstein company
Do you know the scoop? Comment below or Send us a Tip