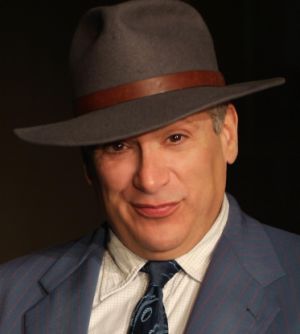 It says a lot about Harvey Fierstein's distinctiveness that it's almost impossible to even say the name 'Harvey' without thinking of that endearingly gravelly voice. Whether you know him as Homer Simpson's assistant Karl, Robin Williams's brother in Mrs. Doubtfire, or Hairspray's Edna Turnblad, the Brooklyn-born actor's uninhibited, self-assured persona is thoroughly his own. Now the four-time Tony winner is back on Broadway with A Catered Affair, the musical adaptation of the 1956 film about a blue collar Bronx couple and their increasingly elaborate plans for their daughter's wedding. Fierstein wrote the book and plays the family's closeted uncle with a poignant mix of humor and regret. The show also stars Tom Wopat and Faith Price, who yesterday received a Tony nomination for her performance.

Thanks for taking time to talk with us. My pleasure. Now what the fuck do you want to know?

I have a lot of questions – So do I but I don't call you!

It would be funny if you did. So has this been something you wanted to make into a musical for a long time? Yes, for at least twenty years. I actually bought the rights ten years ago.

What finally made it possible now? I just got a little tired of going and seeing shows where I just knew that nobody in that theater really wanted to put on that show; they just wanted to make money. I wanted to touch an audience the way I was touched when I was a kid going to theater. I still am touched that way from time to time; there are fabulous shows around, but there is sort of an amusement-park kind of producing at the moment. Which I’m not against, I just don’t like it as a steady diet. It’s like candy, and I certainly love to eat candy, but give me a steak every now and then.

A Catered Affair is not an amusement park and yet it is doing very well commercially, playing at over 80% attendance. Knock wood. Did I just hear you intimate that if something’s good it doesn’t do well?

Well, there were a couple shows on Broadway recently that I’ve loved that played to half empty houses. That’s certainly true. It’s so hard because it is show business. What we do has to appeal to at least a segment of the Broadway-going audience. I think A Catered Affair happens to appeal to the backbone of American theater, which consists of middle age people who really do love theater. We’re not going to appeal to someone who wants to get up and dance in the aisle during the finale. A Catered Affair would not be the show to go to if you’re having a bachelorette party. We actually demand you pay attention a little bit. American entertainment has become so dumbed down that you don’t really have to bring your brain along – they’ll tell you how to feel, when to cry, when to be happy, who the villain is. And A Catered Affair does not do that. I do not believe that’s the role of an artist, to manipulate the audience. I’ve done it! I’ve certainly done it! But I don’t think that’s the highest purpose of art, which is to put life in front of the audience and say, “This is how I see life. What do you make of it?”

What motivated you to adapt this into a Broadway musical? I like the people. I recognize them and understand their problems and I saw the opportunity to make a statement that I had never seen made before about how we live our lives. I don’t believe in taking something and just, you know, making it into a musical with generic songs. I think that’s a silly waste of time. But when it came to adapting this movie I saw something there that I thought had never been said and I thought it could be said musically. I thought it would be too melodramatic if it was non-musical. And I love the period. The statement I’m talking about is that we’re all outsiders in our own minds and that we don’t fully live our own lives. You can go through the motions of living your life but you have absolutely no idea who you are, and who these people around you are. You’ve seen the show, right?

Yes. You’ve got Aggie, who’s spent the last 27 years thinking her husband married her for the money. And she doesn’t dare love him because she’s absolutely positive he doesn’t love her. And then you’ve got this man who goes through the show thinking he’s in danger of losing his taxicab. He’s so scared of that, but he comes to realize that what he’s really in danger of losing is his marriage. And then of course the role I created, Winston, is the ultimate outsider. As a gay person in the ‘50s, he has no place in a family. Back then a gay uncle would be the fifth wheel; in our show he lives on the couch and has no life of his own. And he’s the one who has to come to an awakening that you need to create your own life.

There are people who would say, in the year 2008, why do gay people want to get married? And this seemed like a wonderful way to answer that question without hitting anybody over the head. We basically say, “Cookie, we all grow up in the same family, we all grow up with the benefit of being loved and nurtured. Why wouldn’t we want to create that for ourselves in our own lives?” So by using this character in the ‘50s who’s A, in the closet, and B, doesn’t even realize there’s a possibility that he can have a relationship, and to watch that blossom and see this possibility I felt would be a lovely and non-threatening way to get that message across.

The uncle character in the film is not gay, right? In the film he’s an alcoholic, unemployed card player – sort of an Irish stereotype, brilliantly played by Barry Fitzgerald.

What was the biggest challenge in bringing this to the stage? Finding the right people. That’s always the challenge, putting the right team together. There is no more collaborative art than theater; even in film there may be a lot of people giving their input but in the end the director and editor have so much control. In theater, even the audience has something to say.

Faith Prince is terrific as usual. Was she hard to get? I’ve known Faith for years. When we called her she had just left for London to do Kismet, which turned out to be frustrating but ultimately positive because our director was in London and could meet with her there. We did a reading, just John Bucchino and I and about eight of our friends, just to hear what the it sounded like while we were still writing it. I asked Tom Wopat to read Mr. Halloran, the father of the boy, and he was wonderful, but after the reading he said, “Harvey, I want to play the other one, I want to play Tom.” I said okay, so that’s sort of how that happened.

Do you think Broadway audiences are more accepting of gay characters then when you started performing? Broadway audiences are the best audiences in the world. Theater to me is an act of faith. You buy a ticket, which is never cheap; you make an appointment with yourself and with your friends or family to see a show; and then you sit very close to a bunch of strangers – a lot closer than you would sit in church – and if I walk onstage and say, “My God, it’s a hot day in Moscow!” then the audience immediately knows we’re in Moscow and it’s hot. In a movie, you have to show them Moscow and people sweating; on stage all you have to do is say it and they believe it. So with gay characters, I think they’ve always just accepted it. Torch Song Trilogy wasn’t the first gay play, of course, but what’s interesting about Torch Song is that it was the first gay play with gay lead characters to ever make money. La Cage aux Folles was the first musical with gay characters to ever make money. I think Love! Valour! Compassion! made money, but it’s few and far between. It’s still hard to measure up to what the American version of success is, to make money.

It seems like there are a lot of movies being made into Broadway shows these days. Always.

You don’t think we’re seeing more of that? No. Come on! Thirty years ago you had Applause and All About Eve. It’s a see-saw. Stories get retold. It’s a kind of wonderful thing to recycle what we love. They say you buy back your childhood. If you ever want to make money in the antiques world just buy the stuff you loved when you were a child and when you get old it’ll be worth something. It’s the same with the movies we love. I made A Catered Affair into a musical because I thought I could bring it to a new level and to a new audience.

Do you have any other movies you’ve wanted to adapt for the stage? Sure, I do. There have been a few others and I have a couple more in mind. I think I would like to write an original next but I do what I do. I take the journey wherever the journey takes me.

Did you have any sense then that you one day have a career on Broadway and on the screen? No, no. I was an art student going to Pratt. Theater and writing shows was not something I considered. I was too dyslexic to ever think of myself as a writer. I was just doing what seemed like fun at the time.

Young actors. Young actors, young people, I don’t care. There are no two people who have the same journey in a life in the arts. I could say to you, “You’ve got to make sure you have the training behind you.” But I know plenty of people who make it with no training. It’s all bullshit. Everyone has their own journey. It’s the hardest life in the world, being an actor. It’s the most horrible life in the world but it’s also the most wonderful life in the world. And I would never try to tell somebody to do it or not to do it and certainly not how to do it.