Earlier this year the New York Academy of Medicine in East Harlem celebrated the 20th anniversary of the publication of Harry Potter & the Philosopher's Stone by pulling its 15th century magic books out of its archives, and soon the New-York Historical Society will honor two decades of Harry Potter in the U.S. with a major exhibition on the wizarding series' history. SO MANY DRAWINGS OF DRAGONS.

The exhibition, "Harry Potter: A History of Magic," will head our way courtesy of the British Library next year, and contains rare books, manuscripts, and magical objects both specific to the teen wizards at Hogwarts and from which author J.K. Rowling drew inspiration. These include centuries-old (real! sort of!) wizarding books, a 1582 manuscript on alchemy, a 4th century papyrus detailing dark magic, and Harry Potter illustrator Jim Kay's early baby mandrake renderings. 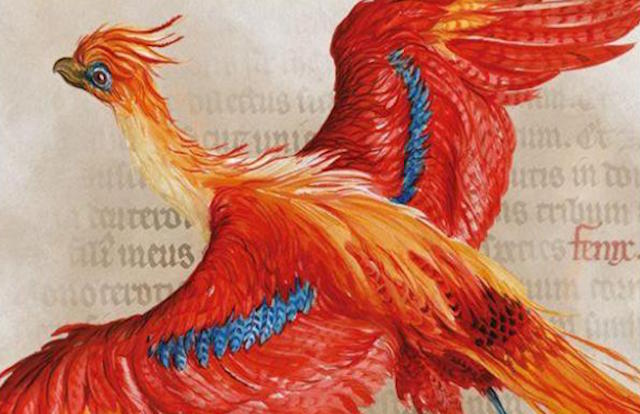 What's scarier than a screaming mandrake, though, is the fact that the U.S. edition of the first Harry Potter book, Harry Potter and the Sorcerer's Stone, is nearly 20 years old (it was published here a year after Philosopher's Stone debuted in the U.K.) Seems like just yesterday I was crying because I never got a letter from Hogwarts. Time, like a Nimbus 2000, flies.

The bad news is, we'll have to hang on until October 2018 for "Harry Potter: A History of Magic," because the U.K. gets everything good first, like the new season of The Great British Bake Off and Harry Styles. Though if you must see OG drawings of Fawkes the Phoenix IMMEDIATELY, it'll be on view at the British Library in London from October 20, 2017 to February 28, 2018, and online at Rowling's Pottermore website next month.