Harry Potter and the Cursed Child, the play that looks at Harry Potter as a middle-aged Ministry of Magic employee and father of three, debuted earlier this year in London, packing the theater with eager fans. And New York may finally get to see the critically acclaimed work... in 2018. But at least the show's producers hope to "provide audiences with access to low priced tickets."

The play's producers, Sonia Friedman and Colin Callender, and Harry Potter author J.K. Rowling confirmed yesterday that they will likely bring the show to The Lyric Theatre on Broadway. A press released noted that the Ambassador Theater Group, which runs the Lyric, "plans a multi-million dollar renovation to completely transform, remodel and reconfigure the 1,900 seat theatre and turn it into a scaled down, more intimate playhouse, with approximately 1,500 seats."

According to the NY Post, ATG is "shelling out tens of millions of dollars to tailor the theater specifically for Harry Potter." Friedman further explained to the Post, "They made us an offer we simply couldn’t refuse," and Callendar revealed to the NY Times, "ATG was prepared to spend millions of dollars to build us a theater within the theater, designed to meet the specifications of what we were looking for — intimate, but big enough so we can have a considerable number of low-priced seats around the house." 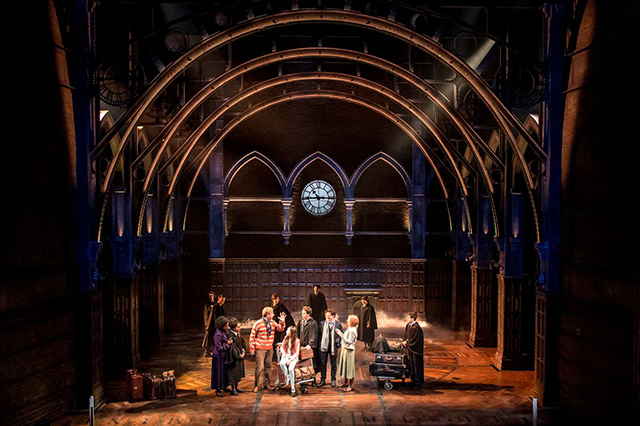 The cast of 'Harry Potter and the Cursed Child' (Manuel Harlan)

There's a current tenant in the Lyric: Cique du Soleil's Paramour, and Cirque apparently spent $25 million (!) on putting the show there. But Cirque's head of the theatrical division told the Times that ATG also "made us an offer we couldn’t refuse. They have some plans for the venue, and they incentivized us to go."

The Times adds, "The [Cursed Child] producers said the Lyric was also appealing because, for a Broadway theater, it has relatively capacious lobby, refreshment, and bathroom facilities, which are especially important for a two-part play which many patrons see over the course of one long day at the theater."

"I’m delighted we are one step closer in bringing Harry Potter and the Cursed Child to Broadway and very excited by the proposed plans," Rowling said. And the producers also made an official statement:

Friedman and Callender said “We are thrilled about ATG’s ambitious plans which will provide a once in a lifetime opportunity to create a unique theatre space tailored to the specific needs of the production over the play’s two parts. The remodeled Lyric will include a smaller auditorium redesigned to the specifications of the Harry Potter and the Cursed Child team, as well as an adapted proscenium and stage that can house designer Christine Jones’ glorious set without swamping or compromising director John Tiffany’s brilliant staging. The spacious front of house environment will also be transformed to optimize the atmosphere and audience experience,”

“But above all,” Friedman and Callender further commented, “ATG’s plans will provide Harry Potter and the Cursed Child with a bespoke home that will be intimate enough for a drama, yet big enough for us to deliver on our commitment to provide audiences with access to low priced tickets throughout the auditorium.”

Harry Potter and the Cursed Child was written by Jack Thorpe, based on a story by him, J.K. Rowling and director Tiffany.

The book version of the play was published in August; Michiko Kakutani wrote, "[E]ven though it lacks the play’s much-talked-about special effects, it turns out to be a compelling, stay-up-all-night read."