by Will Coley
8 Photos The marquee at Harlem’s New Amsterdam Musical Association (NAMA) is only lit up for Monday nights and special events; “Electricity is expensive,” explains the door person. On those occasions, there’s also a humble sandwich board sign on the sidewalk announcing what’s inside: the weekly open mic session, or a spoken word performance. Once you find your way in, you’ll be warmly welcomed by NAMA members, who are determined to keep the organization alive and strong even as Harlem gentrifies around it. But first they want to get it on the map.

NAMA is the oldest African-American musical association in the United States, and has owned its four-story brownstone for 97 years. On a Monday night last month, the performance space on the ground floor was crammed with members, family, friends, and other guests for an installation ceremony for new officers. The new president Willodene Robins (stage name: Ladybird Sunshine), told the room, “We have to keep this place going. This place belongs to all of us. This is a historic place in Harlem U.S.A. Let’s make this place fly. My vision is for a new NAMA to rise higher and higher... like Sly Stone says, 'Boom Shakalaka!'"

At the ceremony, we sat on plastic folded chairs facing the small stage at the far end of the room. The walls are covered with mounted photos of members, some dating from the 1920s. On the floor above, at the top of creaky uneven stairs, NAMA members teach music lessons in rooms with eleven-foot-high ceilings and antique mirrors.

NAMA members know that their brownstone is a prime piece of real estate. It’s on West 130th Street, not far from Sylvia’s, Red Rooster, and the Schomberg Center, on a block with other grand 19th-century brownstones. In 1963, on the same block, Bayard Rustin planned the National March on Washington. As a child, the painter Jacob Lawrence took art classes nearby. In recent years, developers have come knocking at NAMA’s door, looking to buy the place. In today’s real estate market, such a sale would be a windfall for the organization. But each time, NAMA members turned them away. They’re determined to keep the association intact, even in the face of gentrification and an aging membership. 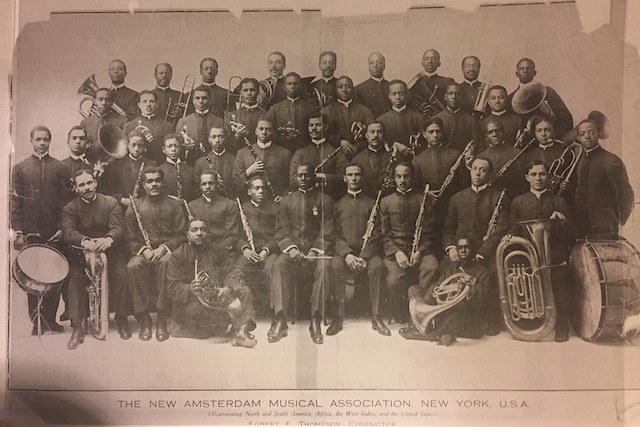 Back in 1904, African American musicians were barred from joining the musicians' union, the American Federation of Musicians Local 310 (now Local 802). So they decided to start their own, and NAMA was born. A few years later, NAMA purchased the brownstone to serve as a rehearsal space for jazz legends like Eubie Blake and Jelly Roll Morton and as accommodation for musicians when they came to town. By 1947, the musicians paid off the mortgage.

Saxophonist Willie Mack and guitarist/bassist Stephen Sink, who serve as NAMA’s board chair and recording secretary, have been been members since the late 1960s. Both men told me that NAMA was pivotal in starting their careers as musicians. “The main thing I got was how to become a professional,” says Mack. “Many musicians were accomplished but had problems [with the business].”

Sink adds, “There was a certain dignity to the place. You had to show up on time, no acrimony, conducting yourself in a professional way.”

During the 1970s and ‘80s, NAMA fell on hard times, recalls Sink. “It was a tough place… People were afraid to go outside, which hurt our attendance,” he says. As many older members passed away, internal squabbles tested the association. The building was neglected and squatters moved in. By the late 1990s, a few members decided to rejuvenate the association, donating $500 each toward sprucing up the building and re-starting regular meetings. “We said we can’t let the place go the dogs,” Sink told me. They got the roof fixed and found pro bono legal help to get out from under a tax lien and obtain nonprofit status.

Today NAMA functions almost as a social club for its members, as well as a de facto community center promoting music education. Every Monday night, there’s an open mic session for singers, musicians, and spoken word performers. Ninety-two-year-old Don Byron regularly comes to play the upright bass. Before he retired, Byron was a postal worker who played Harlem clubs in his free time. “I could point to two or three spots [nearby] where there was live music but they’re all gone now. This keeps me active.”

Professional jazz pianist Yovonne Pierre frequently attends, wearing his trademark wide-brimmed hat. Much younger than the others, Pierre sometimes gets frustrated with musicians who can’t keep up the tempo. (NAMA serves as a place where professionals and amateurs can mix and jam together. Some members miss its stature as a jazz-centric professional organization.) Saxophonist and troublemaker Elliot Pinero roils the room with jokes, like suggesting they play “The Girl with Emphysema,” which is not quite the title of the Brazilian hit. Often you’ll hear Ruby Valdez, a spry 78-year-old, sing jazz standards like “All of Me.” Valdez told me, “Those who went to the spirit world left us a legacy and something we could hold on to and participate in. We’re learning music as we play and it’s just a wonderful experience.”

To help protect this legacy, NAMA joined forces with their neighboring building owners to seek landmark status for the surrounding blocks. This would allow the organization to apply for grants and loans to repair its aging building, which has no hot water and windows that need replacing. Though just over 10 percent of central Harlem has been landmarked compared to more than 70 percent of neighborhoods in more white, wealthy areas like the Upper West Side and the West Village, after NAMA’s leaders testified at City Hall, the City Council created the Central Harlem Historic District in May last year.

At last month’s induction ceremony, Robins announced big plans to bring NAMA back to its former glory and take its rightful place in the history of New York City, launching a membership drive (NAMA currently has less than 100 members) and raising funds to fix the ceiling in the performance space, hire an interior decorator, and apply for state and federal landmark status. She even suggested creating a recording studio in the basement that once served as a speakeasy during Prohibition.

Soon after saying this, Robins unveiled a large sheet cake for NAMA’s 114th birthday. She led everyone in singing the Stevie Wonder version of “Happy Birthday” to to the organization (and anyone else in the room with a January birthday). Then, house band members followed the lead of vice president Arthur Brown and belted out slightly tweaked lyrics, “Me and NAMA, We got a thing goin' on…”

NAMA welcomes members of the public to join in on or listen to their weekly open mic jam session on nearly every Monday from 7:30 to 11 p.m. ($5 cover). Get a sense of the sessions by listening in here.

#harlem
#jazz
#Music
#nama
#New Amsterdam Musical Association
#original
Do you know the scoop? Comment below or Send us a Tip