Happy National Nude Day! How Are You Celebrating?

At Gothamist HQ we are celebrating with the new scratch & sniff Vice cover, really! (Photo by Jen Carlson/Gothamist)

There is really no better way to follow-up National French Fries Day then with National Nude Day, except maybe with 363 days of National Salad Day, followed by replacing National French Fries Day with National Nude Day. But America's fake holiday calendar isn't perfect. So, Happy Nude Day everyone, we hope you enjoyed your baskets of fries yesterday, and we suggest you celebrate today by going to Brooklyn Bridge Park where you will almost definitely run into the guy who lays out all day in a yellow Speedo. If you can't make it there, we have embedded a photo here: 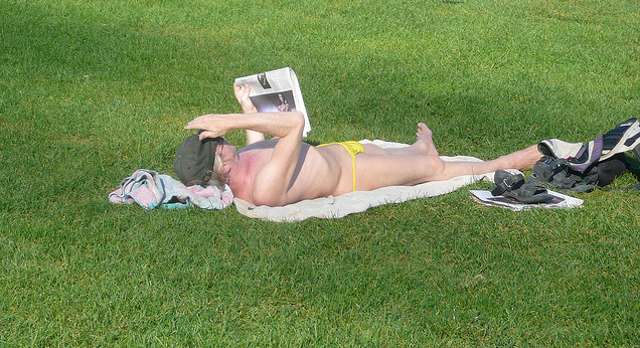 Other ways to celebrate include: in the privacy of your own home, by prancing around naked at The Met (actually, scratch that), staging a Spencer Tunick-inspired photoshoot, or maybe heading out to Jacob Riis Park where there are clothing-optional areas (as it is at any of these places).

Speaking of which, let this be your early reminder that Go Topless Day is coming up on August 21st, which is annually celebrated here in NYC with a a naked march in Central Park. As Times Square Chronicles points out: "One good thing to note is that if you are in New York, according to New York Penal Code § 245.01 Exposure of a Person, being topless in public is legal." And it has been since 1992.

#fake holidays
#naked
#National Nude Day
#nude
Do you know the scoop? Comment below or Send us a Tip