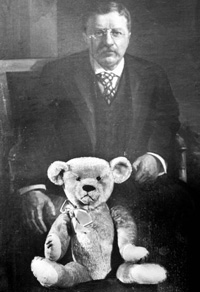 It's our 26th President's birthday, or at least it would have been if Theodore Roosevelt lived to be 152 years old. Earlier today the New York Public Library Tweeted a link to their profile on his birthplace, 28 East 20th Street in Manhattan—did you know he was the only President born in New York City? The library writes:

...he and his well-to-do family lived in the house until he was fourteen, when the family moved uptown. The original building was demolished in 1916. After Roosevelt's death in 1919, the Women's Roosevelt Memorial Association bought the site and rebuilt the townhouse. The building was designated a historic site and is managed by the U.S. Park Service which conducts tours through "five restored period rooms" that "reflect the lifestyle of the Roosevelts circa 1865," plus two museum galleries.

Take a visit yourself, the building is open from 9 to 5, Tuesdays through Saturdays (more details here). This photo to the right was taken on November 13th, 1970—the caption reads: "Classic toy teddy bear placed before the formal portrait of President Theodore Roosevelt for whom this item of Americana was named."

#birthplace
#Teddy Roosevelt
#theodore roosevelt
Do you know the scoop? Comment below or Send us a Tip